Our hopes that the COVID-19 pandemic would cause only a rapid “V-shaped” recession were never realistic and have now been dashed. After a brief stimulus-fueled job market recovery this summer, unemployment claims are on the rise again as furloughs turn into permanent job loss in industry after industry.

The next few months are likely to bring even worse news on the jobs front as airlines and other industries make permanent reductions in their workforces. Next year will inevitably bring cuts in public sector employment—cuts that will hit women and people of color particularly hard. Before the pandemic, women represented 46 percent of U.S. workers, but they have experienced 54 percent of the job losses. Unemployment rates for Black and Hispanic Americans are much higher than for whites and are coming down more slowly. All of this means that the post-COVID economy will be racially and economically unjust—that whatever modest progress we may have seen in recent years already has been erased.

Of course, Americans understand the need for strong government action in the face of this unprecedented challenge. Indeed, it’s perhaps one of the few issues where support for action cuts across political and racial divides. But beyond urgent short-term assistance, government must focus attention on longer-term structural reforms in the systems that Americans rely on for jobs.

We must prioritize action that puts American workers back to work quickly. But we can’t stop there. We must also create systems that develop talent capable of facing future challenges. Two actions are particularly necessary now.

First, millions of Americans urgently need education and training to re-enter the job market. There are no quick fixes to this problem. Even before the crisis, the United States spent less than other countries on job-related education and training—and the federal government and employers both cut funding when they should have been increasing it.

At a time when entire industries are downsizing (think tourism and restaurants) and millions lack the knowledge and skills they need for the new jobs that are being created (such as in health care and technology), we need to think boldly about what comes next.

Now is the time for a massive investment in education and training systems that will allow all Americans to gain the skills they need enter and re-enter the job market as often as they need throughout their lives. This investment should include a scaling-up of innovative and proven community college programs that create economic opportunity for those most in need, new apprenticeship models in a wide range of industries, and strong incentives for employers to invest in developing their workers’ talent.

Second, even when education and training is available, too few people know what they must learn to get the job they want. Employers describe the skills and competencies they seek in vague terms, and job seekers are often left clueless about where they can obtain them. When a job requires a specific credential— say, an industry-recognized certification—people on the outside looking in don’t know what learning that entails or how to acquire it.

Worst of all, job seekers can’t determine which jobs they qualify for with the skills they already have. This lack of recognition and transparency hurts employers, too, who often don’t know where to look for the talent they need.

There are many innovative efforts underway on multiple fronts to tackle this problem. Still, the federal government could play a constructive role by insisting on transparency about knowledge and skill requirements in every education and jobs program it administers. Such action could truly transform the way people find and prepare themselves for work.

Our nation and our people have seldom faced a challenge equal to the one we face today. But crises have always offered the chance to make fundamental and sweeping changes that are impossible in “normal” times. We face just such an inflection point today. We should seize this opportunity to create a post-COVID economy that works for all Americans.

Jamie Merisotis is president and CEO of Lumina Foundation and author of the forthcoming book “Human Work in the Age of Smart Machines,” which will be released Oct. 6.

Latest Tweet
RT @Getting_Smart: "At the end of the day, we've got to ... recognize that ... we're not going to go back to 'normal.' Normal is not someth...
Follow 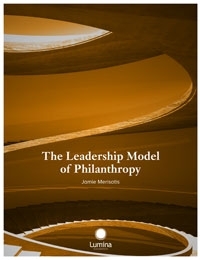 The Leadership Model of Philanthropy