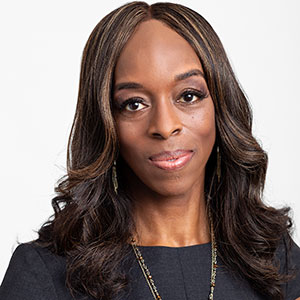 Carmen Twillie Ambar is the 15th president of Oberlin College and the first African American leader in the institution’s 188-year history. Ambar came to Oberlin in 2017, after serving for nine years as president of Cedar Crest College in Allentown, Pennsylvania.

At Oberlin, President Ambar initiated an academic and administrative review process, a data-driven, top-to-bottom examination of the institution. The process resulted in the adoption of One Oberlin, a set of recommendations that establishes a new vision for Oberlin. This vision includes new minors, integrated concentrations, the framing for a new conservatory curriculum, an emphasis on career communities and Winter Term, and long-term strategies for the reallocation of resources and growth for the College of Arts and Sciences and Conservatory of Music.

During her tenure at Oberlin, she conceived the Connect Cleveland initiative which sends all first-year students to Cleveland for a day of service and experiential learning. Additionally, she has promoted Sustained Dialogue, a project aimed at helping students learn to talk about difficult topics with people with whom they disagree.

Ambar has also worked to strengthen ties between the college and the city of Oberlin. Her efforts have included Orientation programs that give first-year students an in-depth introduction to Oberlin, offering guidance on how to be a good neighbor.

In August 2020, Ambar established the Presidential Initiative on Racial Equity and Diversity that launched a 21-person commission to help guide issues of violence, police-community relationships, and racial injustices.

Previously Ambar served nine years as president at Cedar Crest College. Ambar’s successes there included multiple years of multimillion-dollar budget surpluses, a 35 percent growth in net assets that allowed the college to make significant investments in the campus without borrowing, a 92 percent growth in the endowment, and increased student body diversity from 16 percent to 37 percent in 2016.

Prior to Cedar Crest, Ambar served as vice president and dean at Douglass College at Rutgers University. Before Rutgers, Ambar served as assistant dean of graduate education at The Princeton School of Public and International Affairs. As an attorney, she worked in the New York City Law Department as an assistant corporation counsel.

President Ambar is a native of Little Rock, Arkansas, and is the mother of 14-year-old triplets, Gabrielle, Luke, and Daniel.