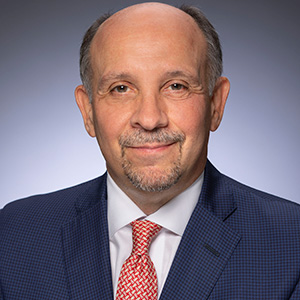 Jamie Merisotis, an international leader in higher education, human work, philanthropy, and public policy, has been Lumina’s president and CEO since 2008.

Before joining Lumina, he was an advisor and consultant in southern Africa, Europe, the former Soviet Union, and other areas of the world. Merisotis is a Council on Foreign Relations member.

An innovator committed to increasing educational attainment in the United States, he focuses on realizing racial justice and equity through Lumina’s efforts to recast higher learning for today’s students. These adults increasingly are Black and brown, from low-income families, or the first in their families to go to college.

Frequently sought as a media commentator and contributor, his writing has appeared in The Washington Post, The New York Times, The Wall Street Journal, National Journal, Stanford Social Innovation Review, Washington Monthly, Politico, The Hill, Roll Call, and other publications.

Previously, Merisotis was president of the nonpartisan, D.C.-based Institute for Higher Education Policy, which he co-founded. He also was executive director of a bipartisan national commission the president and congressional leaders appointed to study college affordability. Merisotis is the author of America Needs Talent, named a Booklist Top 10 Business book of 2016, and Human Work in the Age of Smart Machines, an Amazon category bestseller released in 2020.

Merisotis is on the governing board of The Ditchley Foundation in the United Kingdom. He is past chairman and trustee emeritus of the Council on Foundations and he leads a task force for the organization highlighting philanthropy’s ethical responsibility to the greater good. He also is past chairman of The Children’s Museum of Indianapolis, the world’s largest such entity offering exceptional learning experiences through the arts, sciences, and humanities to transform the lives of children and families.

Merisotis is on the Central Indiana Corporate Partnership board. He advises companies that rely on artificial intelligence and machine learning to address complex challenges related to work and learning.

A distinguished graduate of Bates College, he has been awarded honorary degrees from colleges and universities worldwide.

Latest Tweet
RT @LuminaFound: Join us as we discuss the country's progress towards 60 percent of adults with college degrees, certificates, and industry...
Follow