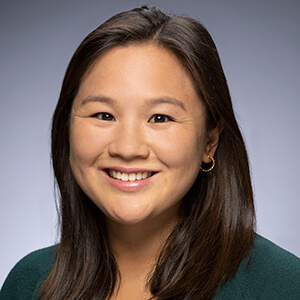 Stephanie Wang is the communications strategy officer for Lumina Foundation, an independent, private foundation in Indianapolis that is committed to making opportunities for learning beyond high school available to all.  Wang elevates Lumina’s work with nonprofit and public news organizations, coordinates writing and editing projects, and leads other high-profile communications projects such as Lumina’s annual media partners workshop. She pitches in with staff-generated blogs and op-eds, identifies training topics and speakers for journalism workshops, and ensures the independent journalism we support lands with the right audiences.

Prior to joining Lumina, Stephanie was the Indiana bureau chief for Chalkbeat, a champion of addressing complex racial topics internally and through its editorial coverage. In 2020, Stephanie wrote a show in partnership with NPR’s “This American Life” about an Indianapolis elementary school reopening during the pandemic. The Indiana chapter of the Society of Professional Journalists repeatedly honored her coverage of race and K12 education.

In addition to overseeing Chalkbeat’s statewide coverage, Stephanie covered higher education. She also had reported on the state’s colleges and universities for IndyStar, where she worked for five years and shaped the newspaper’s emerging coverage of diversity and equity. For example, when the Religious Freedom Restoration Act became law in 2015 amid controversy, Stephanie led RFRA coverage for IndyStar that USA Today, The Courier-Journal, and VOX Media picked up. Her journalism also has been published by Diverse: Issues in Higher Education, the Indianapolis Business Journal, and WFYI.

In 2020, Stephanie was a finalist nationally for the Education Writers Association’s beat reporting award. She is a member of EWA and Investigative Reporters & Editors. The Institute for Citizens & Scholars awarded Stephanie a Higher Education Media Fellowship to improve coverage of career-and-technical education.

After graduating from Northwestern University with a bachelor’s in journalism with a minor in Spanish, Stephanie became a reporter with the Tampa Bay Times for a few years before making her way to Indiana. Stephanie serves on the Indianapolis Press Club Foundation board, which annually sponsors a writing contest for college journalists.