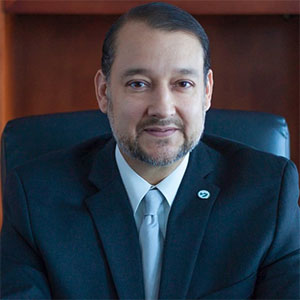 Under his leadership, the college has seen significant growth in dual credit and early college high school enrollment and has markedly increased student retention and graduation rates, particularly among first-generation and Hispanic students. In 2015, the college was chosen from among nearly 1,200 institutions as one of 10 national finalists for the Aspen Prize for community college excellence. In 2016, it won the American Association of Community Colleges’ Student Success Award and was named the Western Regional Equity Award winner by the Association of Community College Trustees (ACCT).

Serrata is an active member of the El Paso community, serving as board chair of the El Paso Collaborative for Academic Excellence. He also serves on the boards of several other local organizations, including Workforce Solutions Borderplex, the Greater El Paso Chamber of Commerce, Hospitals of Providence, and the El Paso branch of the Federal Reserve Bank of Dallas.

At the state level, Serrata chairs the Texas Association of Community Colleges (TACC) and is a member of TACC’s Legislative Committee and its Texas Success Center Advisory Committee. He also is a former chair of the Texas Student Success Council convened by Educate Texas.

Nationally, Serrata is an advisory board member for the Higher Education Research and Development Institute. He also has served as board chair of the American Association of Community Colleges and Excelencia in Education.