Demonstrating the value added of higher education by a qualifications framework

The Journal of College and University Law 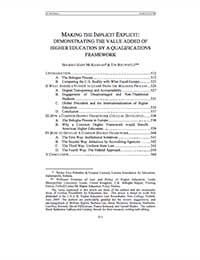 There was a time when higher education in the United States enjoyed considerable autonomy as far as state and federal law were concerned. Over the course of the past fifty years, however, enormous inroads have been made into that autonomy. Using its spending power, its taxing power, its commerce power, and its civil rights enforcement power, Congress now exerts enormous power over American higher education. The states have created and continue to fund the vast majority of American public colleges and universities and have come to expect more from their institutional creations than they did in earlier times.