The Campaign for College Opportunity 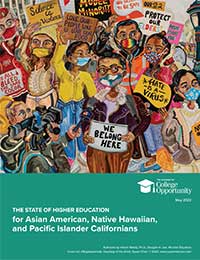 The future of Asian Americans, Native Hawaiians, and Pacific Islanders in the United States hinges on what happens in California. Not only is the Golden State a national trendsetter on educational policies that seek to advance equity, but California also plays an outsized role with respect to the fates of Asian American and NHPI communities as it accounts for nearly one-third of the national Asian American population and one-quarter of the national Pacific Islander population. For some communities, California plays an even greater role—40 percent of Filipino Americans and 36 percent of Vietnamese Americans live in California.

This report from the Campaign for College Opportunity shows the wide variation in college preparation, attendance, and success for the state’s Asian American and NHPI students that is not apparent in most portrayals of these communities. While Asian Americans have achieved significant success in education, many have not and need better supports to ensure they are equipped to thrive within the state’s economic future.