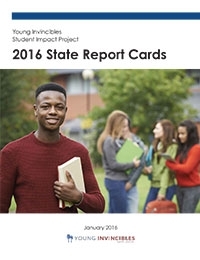 A new report from Young Invincibles offers a 50-state review on how each state supports public higher education. Among the report’s findings: States have cut per student spending by 21 percent between fiscal years 2008 through 2014, with only two states—Alaska and North Dakota—spending as much as they did before the recession.

LATEST NEWS & EVENTS
An updated map helps show the way along the learn-and-work highway
Communities in Indiana, Florida, and Ohio join 22 U.S. Talent Hubs
New Talent Hubs Serve Today’s Students
In a test of fairness more colleges seek SAT alternatives
The future of work is already here. Presidential candidates, policymakers and employers need to get onboard
Why adults quit college and how to bring them back
New Report: American Adults Cite Work-Related Issues  as Top Reason for Stopping Out of College
College credit where credit is due – the move toward ‘recognition for prior learning’
View All News & Events »
Menu