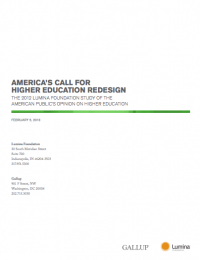 LATEST NEWS & EVENTS
COVID-19 and Human Work
‘Impact investees’ help lead the way as colleges scramble to move instruction online
A Message to Lumina’s Partners About COVID-19
NAACP Image Awards show that students can be powerfully authentic messengers
Case Study: Navigating a CEO Sabbatical
Finishing college can be hard when 'life gets in the way' – but there is help
Equity Narratives: For the undocumented, it’s hard to shake the grip of fear
Equity Narratives: I was an 'accidental racist' who helped deny education to others
View All News & Events »
Menu