@jamiemerisotisConnect with Jamie on LinkedIn

Jamie Merisotis is a globally recognized leader in philanthropy, education, and public policy.  Since 2008, he has served as president and CEO of Lumina Foundation, an independent, private foundation that is committed to making opportunities for learning beyond high school available to all.  He previously served as co-founder and president of the nonpartisan, Washington, DC-based Institute for Higher Education Policy, and as executive director of a bipartisan national commission on college affordability appointed by the U.S. President and Congressional leaders. Merisotis is the author of the widely-acclaimed book America Needs Talent, named a Top 10 Business book of 2016 by Booklist.

He is frequently sought after as a media commentator and contributor. His writing has appeared in The Washington Post, New York Times, Wall Street Journal, National Journal, Stanford Social Innovation Review, Washington Monthly, Politico, Roll Call and other publications.

His work includes extensive global experience as an advisor and consultant in southern Africa, the former Soviet Union, Europe and other parts of the world.  A respected analyst and innovator, Merisotis is a member of the Council on Foreign Relations in New York.

He is the recipient of numerous awards and holds honorary degrees from several universities and colleges.  Merisotis also commits his time and energies as trustee for a diverse array of organizations around the world.  He serves as chair of the Council on Foundations in Washington, DC, and past chair of The Children’s Museum of Indianapolis, the world’s largest museum for children. He also serves on the boards of the Central Indiana Corporate Partnership and the UK-based European Access Network. Merisotis lives with his wife Colleen O’Brien and their children Benjamin and Elizabeth in Indianapolis. 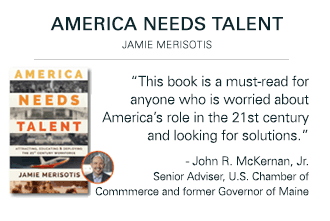 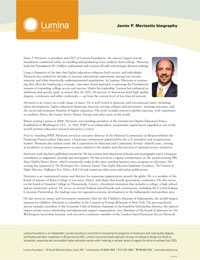