Education, economic security, and the future of our democracy

Education, economic security, and the future of our democracy

Education has always been the answer for America, whatever the question.

The postwar rebuilding effort in the 1940s, the launch of Sputnik in the ’50s, the advent of the Information Age in the ’70s—all prompted renewed calls to increase the number of Americans with education after high school. And each era spawned innovative approaches, from the GI Bill to increased focus on STEM education to Pell Grants to the rise of community colleges.

Still, even before the pandemic struck, only about half of Americans had education after high school. This puts them at a higher risk of being left behind as technology, artificial intelligence, and COVID-19 further reshape the economy.

During the Great Recession, more than 5 million jobs for Americans with a high school education or less disappeared and never came back. Jobs requiring some college or an associate or bachelor’s degree have grown steadily since the recession.

This pattern is repeating today. The sectors hardest hit during the pandemic—such as leisure, retail, and hospitality—were filled with jobs that didn’t require education after high school. Jobs that require a bachelor’s degree or higher have continued to grow, even during the pandemic.

The costs of these job losses go beyond lost income. People unemployed over the long term suffer more than double the rate of psychological problems—such as depression, anxiety, and lower self-esteem—than those with jobs. In a country where growing numbers of people “bowl alone,” those without jobs that come with higher education experience even greater social alienation.

Not having the education required for today’s jobs poses a threat not only to our citizens but to our democracy. There is a strong correlation between levels of education and the allure of authoritarianism—a point made quite clearly in a new report from the Georgetown Center on Education and the Workforce.

Authoritarianism, particularly in the form of populist nationalism, has returned to Russia and parts of Eastern Europe, Asia, and Latin America. China appears resolute in maintaining state control over political and cultural expression. And it’s clear that not even the United States and Western Europe are immune from authoritarianism’s allure.

Today, nearly a third of Americans who haven’t gone to college believe that having a “strong leader” is good for the country, compared to only about 13 percent of those with a bachelor’s degree. Meanwhile, according to a 2017 Pew Research Center study, about a quarter of people with a high school diploma or less say “military rule would be a good way to govern our country.” Only 7 percent of college grads support that view.

The greatest contribution of a better-educated population to shared prosperity is that educated citizens are the best defense against the threats to our democratic way of life. Indeed, U.S. college graduates display a remarkable consistency in their support for civic processes. More than 80 percent of people with master’s degrees or higher and 68 percent of those with any college education voted in the 2016 election. The same was true for only about half of high school graduates and one-third of dropouts.

People with college degrees are also more likely to volunteer, contribute to charity, and participate in community organizations such as schools and service and religious organizations.

Bringing more college-level learning to more of our citizens enables us to address two crises at once. The very skills that enable people to unleash their talents and fully participate in our economy are the same ones we need to strengthen our democracy—and avoid the path that leads to authoritarianism.

Jamie Merisotis is president and CEO of Lumina Foundation and author of the book “Human Work in the Age of Smart Machines,” which will be published Oct. 6. 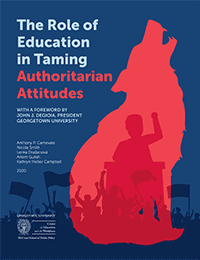 The Role of Education in Taming Authoritarian Attitudes
Latest Tweet
As we highlight the value of college in the recovery, it's good to see this action agenda for #HigherEd and policym..twitter.com/i/web/status/1…mz
Follow