Back To News & Views

WASHINGTON, D.C. – An overwhelming majority of Americans continue to believe that having a certificate or degree beyond high school is important to our success as a nation and as individuals. But, according to new results released today from the annual Gallup-Lumina Foundation Poll on Higher Education, Hispanics and African Americans believe most strongly in the power of postsecondary education to help deliver good jobs and a better quality of life.

A summary of key findings from the Gallup-Lumina Foundation Poll follow:

“Our Stronger Nation report—released earlier this month—showed that the degree attainment rate among U.S. residents is currently at 40 percent, but postsecondary attainment rates among African Americans and Hispanics is significantly lower, at 28 percent and 20 percent respectively,” said Jamie Merisotis, president and CEO of Lumina Foundation. “That’s what makes these new polling data so insightful. Even though these groups have lower rates of attainment, they have much stronger views regarding the importance and value of education beyond high school. We must seize the opportunity and use this information to help address the unacceptably large gaps in attainment.”

“For many decades, education has proven to be this nation’s single most powerful engine of individual progress and upward mobility,” said Merisotis. “And in today’s rapidly changing workplace, that’s truer than ever. Some form of college-level learning is a necessity for anyone who seeks a spot in the middle class, and we must do more to create a system that is equitable and able to close the troubling attainment gaps linked to race, ethnicity, income and age.”

This paper includes results from a survey conducted by Gallup on behalf of Lumina Foundation. The study reported includes findings from a quantitative survey conducted to understand the perceptions of adults currently living in the U.S. about several important issues pertaining to higher education, including degree attainment, quality and value, costs, information access and workforce preparedness. Gallup conducted 1,533 interviews from a random sample of individuals using a dual-frame design, which includes both landline and cellphone numbers. Gallup samples these phone numbers using random-digit-dial methods.

Gallup conducted surveys in English and Spanish from November 3 to December 18, 2014. Multiple calls were made to each household to reach the eligible respondent.

The questionnaire was developed in consultation with representatives from Lumina Foundation and Gallup. All interviewing was supervised and conducted by Gallup’s interviewing staff. For results based on the total sample size of 1,533 adults, one can say with 95% confidence that the margin of error attributable to sampling and other random effects is ±3.3 percentage points. For subgroups within this population (e.g., education level, gender and income), the margin of error would be greater. 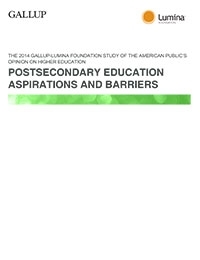