If robots rule the recovery, can Black and brown workers benefit?

If robots rule the recovery, can Black and brown workers benefit?

The job market and a whole dashboard of economic indicators are sending us mixed messages lately. Before we get too excited about the recovery—or too depressed by the enormous challenges still looming—we should consider at least two emerging world views.

First, there’s no question that a recovery is underway, with job growth, strong markets, and other positive signs. But there’s also a growing chasm between the rosy economic outlook of some Americans and the grim prospects of those for whom the recovery is merely a rumor. We know, for instance, that the pandemic’s economic shock waves accelerated trends in workplace automation and artificial intelligence—to the detriment of Black Americans and Hispanic and Latino workers.

This is so pronounced and worrisome that it was the subject of a session at this year’s South by Southwest EDU conference that I was asked to lead: “Will Robots Displace Workers of Color?”

Two points I wanted to make at the outset:

The short answer is that yes, it’s possible everyone will benefit. But the panelists said that’s going to take planning.

“We’re not fixing broken people, we’re fixing broken systems,” explained Spencer Overton, president of the Joint Center for Political and Economic Studies, “America’s Black Think Tank.” The other members of the panel were Vilas Dhar, president of the Patrick J. McGovern Foundation, which is focused on using artificial intelligence for good and building an equitable, sustainable, and thriving future for all, and Cecilia Muñoz, a senior advisor for New America, a DC-based organization focused on renewing the promise of America.

All three panelists noted that people of color, immigrants, and the economically disadvantaged typically hold the riskiest and most insecure jobs in our society—they pick our food, transport it, and stock it in the supermarkets, for example. Of those, 40 percent don’t earn a living wage, Muñoz said.

Overton said the Joint Center studied 156 counties that are at least 35 percent Black and designated as rural by the U.S. Department of Agriculture. In those areas, 63 percent of Black residents had a high school diploma or less. Fifty-two percent of the Black children there lived in poverty, and unemployment is three times the national average.

Among those people, over half are at high risk of losing their jobs to automation, compared with about a third nationwide.

The panelists agreed: We must offer more and better education options (not just four-year college degrees), and we need to give the people who are likely to be displaced a seat at the table to figure out how to best use technology to make work more efficient.

Dhar urged that we re-examine our default model of allowing four-year colleges to be the path to a technology-enabled career. Solutions such as micro-credentialing and two-year college are a must, he said, and we shouldn’t force displaced workers to take on education debt.

Muñoz recommended that people of color be positioned as the drivers of change. When her organization, New America, asked grocery workers about technology, “they were interested in knowing how the technology was designed because they know these jobs, and they know what efficiencies can be built through technology for a better outcome. They see how you can use technology to make the workplace more efficient.” They felt this way even though such changes could cost them their jobs.

As Muñoz said, work is what connects us to each other, to our society, to our sense of purpose in the world. As we rethink and rebuild these systems, we must make them systems that work for everyone. 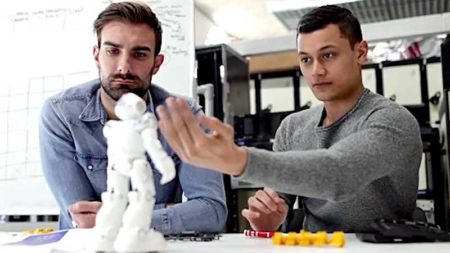 In the rural South, Blacks disproportionately perform repetitive tasks that will disappear with increasing use of automation, AI, and robotics. How do we ensure they are prepared for the work that will replace these lost jobs, human work?