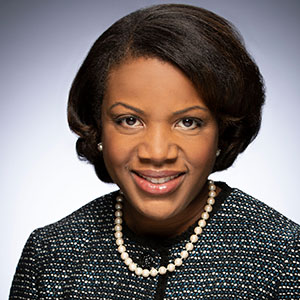 Danette Gerald Howard, Ph.D., is Lumina’s senior vice president and chief strategy officer. Howard oversees several of the foundation’s strategies aimed at increasing the number of adults who have college degrees, certificates, and other credentials of value, including state and federal policy outreach. She also leads Lumina’s efforts to mobilize and engage businesses, communities, colleges and universities, and other actors with stakes in education and training after high school.

Before joining Lumina, Howard served as secretary of higher education in Maryland, leading the Maryland Higher Education Commission. In that role, she oversaw Maryland’s statewide financial aid program, approved new academic programs and institutions seeking to operate in the state, and advised the governor and legislators on higher education policies and initiatives.

A nationally regarded analyst and leader, Howard previously served as director of research and policy analysis at the Maryland Higher Education Commission. She also served as assistant director of higher education policy at the Education Trust in Washington, D.C.; as a researcher at the University of Maryland, College Park; and as a student affairs administrator and admissions counselor at the University of Maryland, Baltimore County.

Howard earned her bachelor’s degree with highest distinction from Howard University, where she serves on the board of trustees. She also holds a master’s degree from the Harvard Graduate School of Education and a doctorate in higher education policy from the University of Maryland. In 2015, she was honored with Howard University’s Distinguished Alumni Achievement Award for her outstanding success and national distinction in the fields of education and policy.