The University System of Georgia and the Tennessee Board of Regents have embraced the tenets laid out in Lumina Foundation’s Beyond Financial Aid guidebook. The programs help with everyday expenses, such as transportation and child care, that often delay the progress of low-income students or prevent them from finishing college.

The Georgia system—serving more than 300,000 students in 26 institutions (including Georgia Gwinnett)—has fully adopted the Beyond Financial Aid approach. The guidebook’s principles are integrated into a statewide initiative aimed at increasing overall graduation rates, said Robert Todd, the system’s director of policy and partnership development. 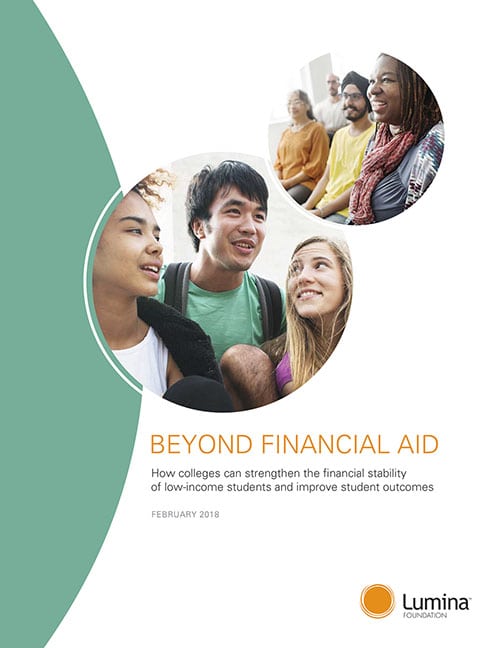 “We rolled it into the Complete College Georgia plan,” Todd said, which makes Beyond Financial Aid part of each institution’s approach to serving students from low-income families.

For example, at Dalton State College, local administrators saw the need for a food pantry, and so they created one, Todd said. It’s called the “Birdfeeder,” a nod to the school’s Roadrunner mascot.

And at Columbus State University, with a large population of adult learners, Todd said, “they knew if they didn’t address child care, they would lose a lot of students.”

So they addressed that problem in a very direct way. This fall, Columbus State has 70 students who each receive a $125 weekly check to offset child-care costs. “Boy, is that helping families,” said Lisa Shaw, who directs the university’s Academic Center for Excellence.

In Tennessee, the Board of Regents oversees 27 colleges of applied technology and 13 community colleges, serving a total of 118,000 students. The board recently integrated the Beyond Financial Aid initiative into its broader student success program. Now assistance for things like food and health care are offered right along with other supports such as expanded job-placement services and efforts to boost students’ financial literacy.

The goal is for each Tennessee institution “to identify local resources to help students overcome barriers,” said Heidi Leming, the board’s vice chancellor for student success.

With nine campuses in two time zones, Roane State has found that students often have difficulty getting to far-flung classrooms and labs. So the school’s foundation helps by offering transportation assistance, including money that students can use for gas or a tire repair, Brunner said.

On Roane State’s Cumberland County campus, many students needed to be fed. The college partnered with a local Baptist church to bring lunch to hundreds on campus once a month and twice during finals week. The college also teamed up with a Methodist church that provides Meals on Wheels service to the campus’ neediest students, Brunner said.

Although the statewide programs are relatively new, dating back to just 2016, each state system already has success stories to share.

Shaw tells the story of a woman who had twin sons, 17 months old. The student wanted to return to Columbus State to finish her junior and senior years and become a nurse, but in the past had been forced to choose between attending school or paying for child care.

“With the assistance from our child-care program, she was able to place her twins in child care with no out-of-pocket expenses and enroll in our nursing program,” Shaw said. “She graduated in two years and provided the twins with a jump start in early education and preparation for school readiness.”

At Roane State, Brunner points to the success of Makalea Alexander, a 33-year-old Army veteran and mother of two daughters.

By her own admission, Alexander has had a difficult journey. She struggled with drug addiction as a teenager, was discharged from the Army after failing a drug test and endured a difficult marriage before separating from her husband. She also has battled depression for years.

She said that when she enrolled at Roane State in 2015, the school helped her fill out the necessary paperwork for financial aid and then cut her a check ranging from $100 to $150 a month to help pay transportation costs. And when she completed her coursework to become an occupational therapy assistant, the school “paid for my state exam and background check—that’s more than $300—and paid for my state license, another $85,” she said.

Now Alexander works 30 to 40 hours a week, earning more than double the hourly rate she had earned in any previous job, she said.

“Roane State helped me get my life back on track, and now I’m able to provide for my daughters,” Alexander said.

“I want other people to get an education and feel the way I feel now. The college gave me confidence in myself.”

Amarillo College accepts ‘No Excuses’ in pursuing its anti-poverty mission

Amarillo College President Russell Lowery-Hart has made it his mission – and that of his college – to help low-income students succeed. The key ingredient in his formula? Love. “When you love the students you have rather than the students you wish you had, and when you build your college around their needs, you can actually ensure that they complete what they’ve started,” he says.

From the very first, Georgia Gwinnett has put students first

The Gonzalez brothers, (from left) Arnoldo, Homero, and Esteban, all have benefited from the student-centered approach adopted by Georgia Gwinnett College near Atlanta. The brothers are all GGC graduates, despite the barriers they faced as young immigrants from Mexico. The college took an intensely personal approach to ensure their success – standard operating procedure at Georgia Gwinnett.

Morgan State nourishes students every way it can

These days, Morgan State University junior Deja Jones is focusing on her course work, but that hasn’t always been the case. In fact, money was so tight during her sophomore year that Jones was “literally fainting” because she couldn’t afford regular meals. That’s when Morgan State’s wraparound support system kicked in.