Our Work
Our Work

Lumina Foundation is committed to increasing the proportion of Americans with high-quality degrees, certificates and other credentials to 60 percent by 2025. Lumina’s outcomes-based approach focuses on helping to design and build an equitable, accessible, responsive and accountable higher education system while fostering a national sense of urgency for action to achieve this goal.

Lumina's goal—that 60% of Americans hold degrees, certificates or other high-quality postsecondary credentials by 2025—is essential to meeting our nation’s growing need for talent.

Between now and 2025, assuming current rates of degree and certificate production continue, about 24.2 million Americans will earn postsecondary credentials. To reach the goal, 16.4 million more need to be added to that total. Lumina is committed under our current strategic plan to make substantial progress by 2020 toward this total. Specifically, our target is to increase attainment by 5.9 million over the next three years. These credentials will be earned by the millions of Americans who will not obtain postsecondary credentials if we keep doing what we’re doing but could be added to the total counting toward the goal.

Over the course of our first two strategic plans, we have made substantial progress toward the goal. With clear and abundant evidence, we now know that to increase postsecondary attainment to the levels we need, we must work with many partners to build an equitable postsecondary learning system out of our current disparate and disconnected systems. Fortunately, the need to increase postsecondary attainment is now widely recognized by the American people, and state and local leaders throughout the nation are mobilized to take action.

It is time to move to action on solutions that dramatically increase attainment to reach the goal. The comprehensive system of postsecondary learning that Lumina is committed to help build will allow all Americans to obtain credentials representing the knowledge and skills they—and the nation—need. It is the key to meeting the nation’s growing demand for talent.

What is the Issue?

The U.S. lags behind its global competitors in postsecondary attainment. America currently ranks a disappointing 11th in global postsecondary attainment, but the pace of attainment among younger adults is even more troubling. According to the OECD data, an astounding 64 percent of young adults (ages 25-34) in South Korea have completed education beyond high school. Those rates in Japan and Canada are approaching 60 percent, while young adults in the U.S. are hovering just above 40 percent.

Why is the Goal so Urgent?

Our rapidly evolving, complex economy is causing a surge in demand for skilled employees. Two-thirds of all jobs created in this decade will require some form of postsecondary education, according to the Georgetown Center on Education and the Workforce. Today, only about 40 percent of adults in the U.S. have achieved that level of education. Americans with a high-school diploma or less accounted for four out every five jobs lost in the recent recession.

Students who’ve traditionally been under-represented by the old system. When we talk about access for underserved students, it's with a focus on today's student These are low-income, racial and ethnic minorities, working adults, and first-generation students. The students we once called nontraditional are no longer the exception in postsecondary education … they are the rule. These 21st-century students represent our future—not merely the future of the higher education enterprise, but the future of the nation itself.

How Can I Help?

Read about the many ways to contribute to the national effort to increase attainment. We have suggestions for innovative thinkers, institutional leaders, policymakers, student advocates, and families to connect and share strategies with others working to help students succeed. There is a role for everyone in both public and private sectors to contribute. The goal is not just Lumina Foundation's goal, it's the nation's goal for creating a stronger nation through higher education.

WHAT IS THE ISSUE?

American Attainment Lags Behind Other Countries

When America first reached a higher education attainment rate of 40% for young adults back in the 1970s, it represented the great success of our nation’s efforts to educate the baby boomers. Unfortunately, we stopped at 40 percent while other countries first caught up and then pushed beyond. Today, several countries, including Korea and Canada, award college-level degrees to more than 50 percent of their young people. Plus, their pace of increasing attainment shows no signs of slowing down.

Despite recent positive momentum in America, international comparative data produced by the Organization for Economic Cooperation and Development (OECD) shows the U.S. is still lagging behind its global competitors. America now ranks a disappointing 11th in global postsecondary attainment, but the pace of attainment among younger adults is even more troubling. According to the OECD data, an astounding 64 percent of young adults (ages 25-34) in South Korea have completed education beyond high school. Those rates in Japan and Canada are approaching 60 percent, while young adults in the U.S. are hovering just above 41 percent.

Recent data shows Americans are concerned about the country’s low attainment rates and they are ready for leaders to do something about it. The latest Gallup/Lumina poll found that 90 percent of Americans believe it’s important to increase the rate of college attainment in America. And 89 percent of Americans report that higher education institutions need to change to better serve the needs of today’s students. 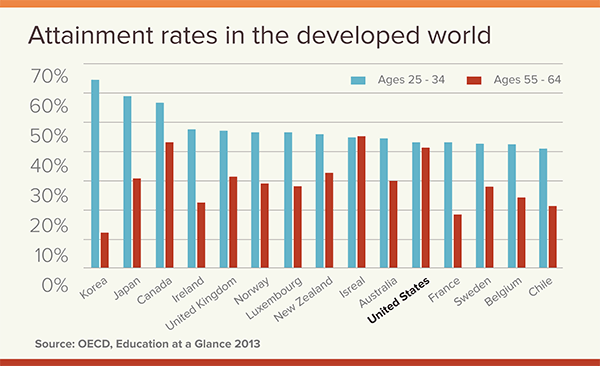 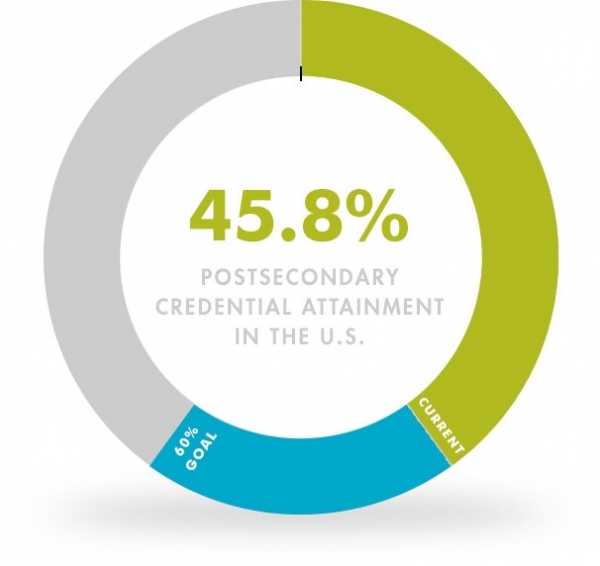 WHY IS THE GOAL SO URGENT?

Today’s employers want to hire graduates with a broad array of knowledge and skills—not just specific content knowledge, but transferable skills like critical thinking, the ability to solve unscripted problems, and to communicate effectively,” said Jamie Merisotis, Lumina’s president and CEO. “Higher education and employers must work together to prepare students for real-world success."

Perhaps the clearest evidence of the need to increase higher education attainment comes from the fact that employers cannot find people with the skills they need to fill all of their current job openings, much less those that will be created in the future. In a recent survey, a third of employers cited “lack of technical competencies/hard skills” as their main difficulty in filling jobs — up from just 22 percent in 2011.6 For example, in the manufacturing sector, where advanced manufacturing techniques are dramatically increasing the demand for postsecondary skills, fully two-thirds of manufacturers reported “moderate to severe” shortages of qualified workers in 2011.7 The same issue is a growing problem in the healthcare industry.

What happens when employers can’t find people with the skills and credentials they need? The answer is that the economy as a whole suffers. Available evidence suggests that our nation’s inability to match jobs to people with the right skills is a major factor in explaining why employment rates have not improved as quickly as they should have in the economic recovery. 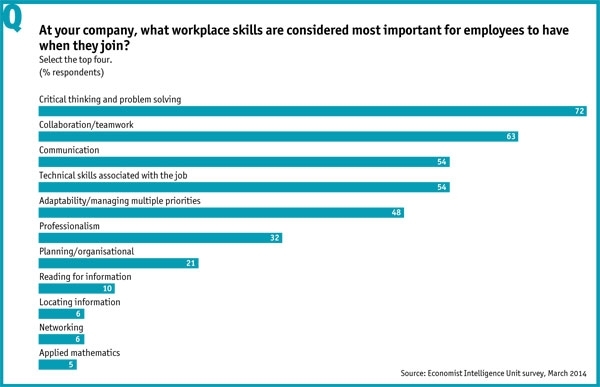 The overwhelming consensus among employers is that too many graduates lack vital skills required for today’s jobs. So how can business align with higher education to prepare today's students for tomorrow's workforce?

Troubling disparities in educational attainment aren’t new; they’ve endured for decades—and we ignore them at our peril. Consider the nation’s Hispanic population. The median age for Hispanics in this country is 27; for everyone else, it’s nearly 40. That means our nation’s schools are already serving a disproportionately large population of Hispanic students. And, since Hispanics represent the fastest-growing segment of the national population, these numbers are sure to increase.

A well‐educated citizenry is the foundation of social equity, cohesion and successful participation in the global knowledge economy. Preamble  of  the  IAU  2008  Policy  Statement  on  higher education access and success

The  current massive inequities we see threaten global economic development and political stability, not to mention literally the lives of billions of people across the globe.  That's why Lumina's  mission to enroll and graduate  more  students  from  college is especially focused on the growing  numbers  of today's students:  adult  learners  without  a  college  degree  coming  back  to  college,  low  income  students, students  of  color  and  first  generation students.  Lumina recognizes that, to make effective change in higher education, equity and excellence must be at the center of all of our efforts. 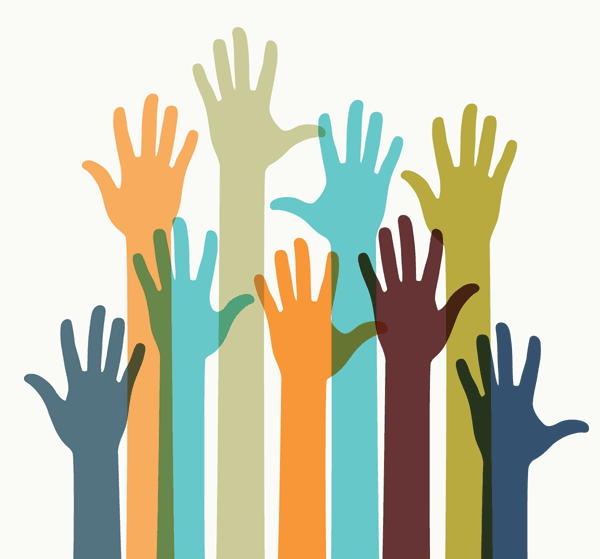 Read more about why Lumina is committed to both equity and excellence in higher education.

HOW CAN I HELP?

For thinkers and problem solvers: lend your innovative ideas to our evolving higher education system in Lumina's Education Innovation Prize.

For policymakers, read Lumina's policy priorities that will increase attainment among our most vulnerable demographics.

See more ideas about what you can do to help.

Our Mission and How to Get Involved

What You Can Do

Every American has a role in helping us reach our nation's attainment goals, and we all benefit when we get there. Everyone–from employers to instructors to families–has clear steps to take. And no matter how small, each step toward the goal is essential. Find out how you can contribute to building a stronger nation through higher education.

Learn More
WHAT YOU CAN DO

What Needs to be Redesigned

Lumina's priority is to fundamentally rethink how higher education is delivered, and what outcomes can be expected from postsecondary completion. Lumina Foundation is leading a national conversation about the disruptive innovations helping to design and build a 21st century system that meets the needs of all students.

Learn More
WHAT NEEDS TO BE REDESIGNED

Read some key facts on how we can increase levels of educational attainment equitably, through the use of quality data to improve student performance, identify problems, measure progress toward the goal and inform policy and decision making at all levels.