This is the President’s Message from the latest Focus magazine, “Rural students face a growing gap in college-level learning.” See the magazine online—including videos with some of today’s promising rural students.

We’ve all heard the phrase “flyover country,” the dismissive term often used by coastal elites to describe the vast middle parts of the nation that they tend—or choose—to ignore. Those two words encapsulate a troubling view—the idea that the nation’s less populated areas are somehow less important or less valuable, that the people there can rightly be overlooked.

No idea could be more wrong—or more dangerous to America’s future. The fact is our rural areas are teeming with human potential. And if we are to prosper as a nation—economically, culturally, politically, socially—we must unlock that potential. We must, through high-quality education programs, fully develop the talent in our rural regions so that it can be unleashed to benefit us all.

That’s what this issue of Focus magazine is about: redefining flyover country as a focal point for a nationwide talent-development effort. In this Focus, you’ll read real-life success stories from several rural students. For instance:

All of these individuals—and many more whose stories we share—offer compelling views from the front lines of rural America, putting a human face on an increasingly important national issue.

I hope you’ll take the time to fully explore this issue of Focus, and that it gives you a better understanding of the state of education attainment in rural America. More important, I hope you’re spurred to action by what you learn here. Rural students are a vast and vital national resource—one we can’t afford to fly over.

Back to News
Latest Tweet
Delighted to contribute to The Future of Work Playbook with @Verizon and @Xynteo - exploring the most important que..twitter.com/i/web/status/1…l3
Follow 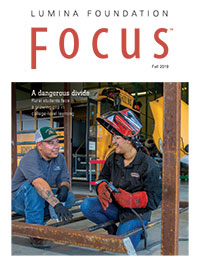