Lumina established the Talent, Innovation, and Equity Partnership to give states an array of funding, research, and related support. Virginia will use the grant to pursue improvements in four critical areas: leadership culture and values; equity policy and initiatives; communications and outreach; and programming to improve attainment. Through these actions, Virginia intends to increase educational attainment for targeted populations by 5 percentage points over the next four years.

“We met personally with Gov. (Ralph) Northam and his team, and we appreciated his sincerity and commitment to making things right in Virginia by focusing on diversity, inclusion and achieving racial equity,” said Danette Howard, Lumina’s senior vice president and chief strategy officer. “At Lumina, we view Virginia’s commitment to addressing racial disparities as an important step in the governor’s pledge to focus the remainder of his term on addressing long-standing injustices.”

“As leaders, we have the responsibility to address the systemic racism that holds people back,” said Gov. Northam. “It’s time to take action to right the wrongs that began in Virginia 400 years ago, and this legacy continues in the form of lower educational achievement rates among students of color. This initiative with Lumina Foundation is just one way we are making tangible and measurable progress for those who are most underserved in higher education. We are grateful for the investment in Virginia. And while we know that a 5 percentage point increase is no easy task, we are up to it.”

To ensure that 60 percent of Americans have education beyond high school by 2025, states must focus on students who have been left behind. The TIE partnership is important because fewer than one-third of the nation’s Native American, Latino and Black students have earned a credential beyond a high school diploma. Among whites, the attainment rate is 47.1 percent. Lumina’s Stronger Nation digital visualization tool further highlights these unequal outcomes, including the racial and ethnic disparities in Virginia. Nationally, state policymakers are positioned to push for the adoption of a learning system that better serves all of today’s students, especially people of color. That’s why Lumina launched the $3 million TIE initiative in 2017.

Virginia, Colorado, Oregon and Tennessee are among 43 states that have set clear goals for better educating residents. Lumina has formed a network of TIE states and highlights their efforts as part of its Strategy Labs outreach to policymakers.

“Virginia’s goal is to be the best-educated state in the country by 2030, with more than 70 percent of its working-age residents having a college degree or other credential of value beyond high school,” said Peter Blake, director of the State Council of Higher Education, which, in collaboration with the governor’s office, will be administering the TIE grant. “To be successful, we know our efforts must focus on equity from the outset.”

The foundation expects to award grants to as many as six states. Lumina is looking for states that are working to create policy environments conducive to increasing attainment, particularly using options from Lumina’s state policy agenda. Lumina seeks states whose leaders commit publicly to addressing racial disparities, because meeting the 60 percent goal will require a strong focus on helping more students of color finish their programs and earn credentials. Also, states must focus on students from low-income families, people who are the first in their families to attend college, adults with no recognized learning beyond high school, and adults who stepped away from college for financial, family, or other reasons.

In late 2017, Lumina announced a separate $2.5 million grant program to address racial tensions nationally on college campuses. Lumina’s board created the fund in response to violence that erupted in August 2017 at a “Unite the Right” rally in Charlottesville, Virginia. The grant program is used to support colleges and universities that are working to improve their campus climates by providing opportunities for constructive racial dialogue. 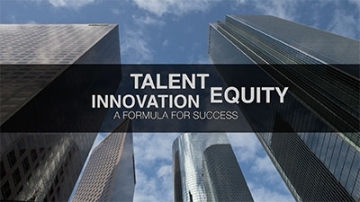 What would it look like if more states dedicated their resources toward creating a "talent pipeline?" Lumina Senior Vice President Danette Howard talks about prioritizing talent, innovation, and equity. 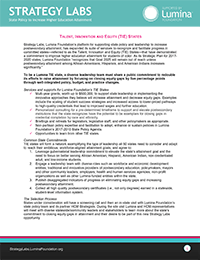