Millions of students need help navigating college; my sister — a single mom battling cancer — was one of them

Millions of students need help navigating college; my sister — a single mom battling cancer — was one of them

I don’t come from a college-educated family. My father started college at Butler University in Indianapolis only to stop, begin work, and never return. My mother started, too, but couldn’t get past college algebra. So, when it was our turn to go to college, they were determined to see their children do well and graduate.

My oldest brother graduated from the Art Institute of Fort Lauderdale after high school, and my eldest sister started at Vincennes University but left after one semester. Another sister earned a GED and has sporadically enrolled in college, but hasn’t yet finished. An older brother went to the U.S. Military Academy at WestPoint – which he jokingly argues was not college (it was a lot harder). Then I graduated from the University of Florida. And, if you are counting, the sixth child — my little brother — attended Indiana State in homage to the great Larry Bird, then DePauw University, then Tallahassee Community College before graduating from Florida State University. So, my siblings and I have experienced most of what higher education has to offer.

My sister, Kimberly – the one who stopped out of Vincennes – is the focus of our story. From our earliest days, to me, Kimberly was pure magic. She had a large personality, outsized only by her heart and her drive to achieve. So, when she left college after a semester, I didn’t understand it; it seemed out of character. 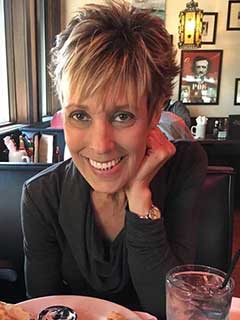 A few years later, Kimberly came home, with a child. As we helped care for the baby, we learned he was deaf. Wanting the best for him, Kimberly moved to Jacksonville so he could attend the Florida School for the Deaf and the Blind. Without a degree and caring for a child with special needs, she worked two jobs, including odd jobs like selling food at Jaguar football games. She met a wonderful man named Pat and had a daughter. For a while, life was good. Then Pat was diagnosed with cancer and died soon after. Still working several jobs, my sister still managed to be a “soccer mom” for her daughter and strong support for her son.

She also never gave up on her college goals. I recall a wedding where she looked at her three little brothers – all with bachelor’s degrees at the time – and said in earnest that she was going to get hers, too.

Years later, as I worked at the American Association of Community Colleges in Washington, D.C., she shared that she was enrolled at Florida State College at Jacksonville to get her associate degree. My truly amazing job at AACC was now bolstered by a personal purpose.

But another call from her in 2010 brought me to my knees. She was battling breast cancer. After working hard to pull the pieces together after Pat’s death – she was sick herself. And it wasn’t a gentle kind of cancer, either. My dear sister Kimberly – with an outsized heart and unparalleled drive – somehow stayed enrolled at FSCJ to earn her associate degree in 2012. Then while battling cancer, caring for two children, and working around the clock, she went on to earn her bachelor’s degree in 2014.

I asked her why she stayed at Florida State College and she said they made her feel comfortable. She knew the people, they knew her, and she could drive there easily. She felt a strong sense of pride in earning her degree. It was palatable. And the imprint of that smile on her face still makes me emotional.

Her story is not unique

Kimberly — like so many adult students — persevered in amazing ways. But her story is not unique.

There are many students like her at community colleges offering workforce bachelor’s degrees. These talented, resilient students – who at age 29 or 49 decide to invest in themselves – need schools, faculty, and staff to understand the pressures adult students face as they juggle classes, work, and families.

Of the 36 million students in America with some college and no degree, 10 percent – or 3.5 million – have huge potential to earn a credential. Another 56.8 million Americans have finished high school, and perhaps earned a credential, but not a bachelor’s degree. The need and opportunity for workforce baccalaureates from community colleges is ripe. It’s up to us to meet that urgent need.

Shining pride in her degree

A year after Kimberly earned her degree, I became executive vice-chancellor of the Florida College System, which spans 28 colleges serving 800,000 students. On my first day there, a policy issue needed our attention. And it really hit home: Local colleges, including the one that served my sister so well, were under a legislative moratorium against offering four-year workforce degrees.

We gained the support needed to lift the moratorium through the smart use of data in addressing concerns about relevance, mission creep, and quality. Our efforts helped students, and I’m proud of that.

I left that job in 2017 to help systems of higher education improve. Late in 2018, as I led an initiative to remove the barrier that tripped up my mom – college math – I got a call that Kimberly was in the hospital. I drove to see her, and as I entered her room, the brave, radiant, strong sister I knew now existed only in her eyes. I sat with her for hours – talking, making jokes, and holding back tears. Within a week, she was gone.

At the funeral, all I could think about was her intense, shining pride at earning her degree. In some ways, her success made my suffering easier.

To the wonderful people of Florida State College, thank you for giving a cancer-fighting, multiple job-holding, single-parent widow of a special-needs child the support she needed to achieve her dream. Now, more than ever, adult students need our expertise and our grace as they fight the toughest odds while reaching for the stars.

Christopher Mullin, Ph.D., is strategy director of data and measurement for Lumina Foundation. Previously, he served as director of Strong Start to Finish at the Education Commission of the States and as executive vice-chancellor of the Florida College System. He is a frequent speaker at conferences.