Lumina Foundation’s A Stronger Nation measures industry certifications for the first time, shows disparities in attainment persist among people 25 to 64 who are Black, Hispanic, and Native American

INDIANAPOLIS – Lumina Foundation today announced the release of new data on Americans’ attainment of education beyond high school in its signature online report, A Stronger Nation, which for the first time includes data on industry-recognized certifications. According to the latest findings, the overall national attainment rate among adults 25 to 64 years old is 51.3 percent.

A Stronger Nation tracks progress toward the national goal of 60 percent of working-age Americans holding a credential beyond the high school diploma by 2025 that leads to further education and employment. The nation’s attainment rate includes associate and bachelor’s degrees, as well as high-value “short-term credentials,” that is, college certificates and industry-based certifications.

“Counting certifications as part of short-term credentials is an important milestone, as it provides a more complete picture of learning after high school among today’s students,” said Courtney Brown, Lumina’s vice president of strategic impact. “Certifications are part of an expanding set of post-high school credentials that are on-ramps to opportunity. Especially now, as tens of millions of workers find themselves unemployed and struggling to find or keep jobs, certifications may offer promising paths forward.”

Certifications are most often awarded by industry organizations and are based on assessments of skills and knowledge. They represent a critical opportunity for more people to obtain valuable education and training. Such credentials can be acquired more quickly and with less financial burden than degrees. They help individuals develop skills and competencies that employers want, and they lead to good jobs with higher salaries.

Lumina launched A Stronger Nation in 2009 to provide a continuous measure of educational attainment and to better understand where disparities exist. As a regularly updated online data visualization, A Stronger Nation provides insights at the national, state, and county levels and across major metropolitan areas, with breakdowns by race, ethnicity, age, and credential type.

Key findings from this 2020 update include: 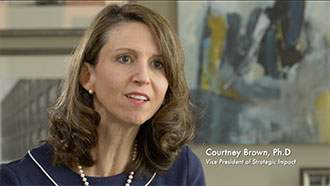 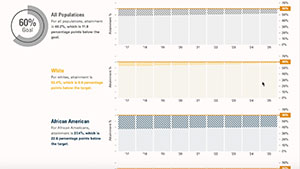 A new section was added to the Stronger Nation report in 2019 that allows states to explore what it will take to reach their talent goals.