Back To News & Views

INDIANAPOLIS – A new report released today by Lumina Foundation reveals real progress has been made in the national effort to increase postsecondary attainment, but current rates won’t be enough to meet America’s future economic and workforce demands. The annual report, A Stronger Nation through Higher Education, finds that unless actions are taken now to significantly increase postsecondary attainment, the nation will fall short of workforce needs by the end of this decade.

According to the Georgetown Center on Education and the Workforce, 65 percent of U.S. jobs will require some form of postsecondary education by 2020. Yet, according to Lumina’s A Stronger Nation through Higher Education report, only 40 percent of working-age Americans (ages 25-64) held a two- or four-year college degree in 2013—the most recent year for which data are available. That figure is up from 2012, when the rate was 39.4 percent, and from 2008, when the rate was 37.9 percent, or a total of more than 2.8 million more degrees.

This progress reflects both increasing demand for postsecondary credentials and the efforts of higher education institutions, policymakers and many others to respond to that demand. But, these incremental gains aren’t nearly enough to reach Goal 2025—a national effort calling for 60 percent of Americans to have a high-quality postsecondary degree, certificate or other credential by the year 2025.

“Economists and other experts give us good reason to be convinced that reaching Goal 2025 is a national imperative,” said Jamie P. Merisotis, president and CEO of Lumina Foundation. “We have just 10 years to reach it, and our current pace of progress is insufficient for meeting employers’ workforce needs and addressing the growing inequality issues we face as a nation. For America to truly prosper—for the nation to attain, not just individual opportunity and economic security, but social justice and cohesion—an increased sense of urgency is needed to expand college success dramatically, and in all directions.”

Attainment rates by race increased across the board from 2012 to 2013.

The good news is that attainment rates by race increased across the board from 2012 to 2013. And attainment rates among young adults (ages 25-34)—a promising indicator of future results—continue to outpace the overall adult population.

But, enrollment trends are less encouraging. While the number of college graduates increased again in 2013—with 2.9 million obtaining associate and bachelor’s degrees—enrollment went down by 600,000 students, most notably among adult students. Enrollment was also down among African American and Native American students and flat among Hispanic students.

A Stronger Nation estimates that if current trends continue, 30.7 million more Americans will earn college credentials by 2025. That increase will allow the nation to reach an attainment rate of 48.7 percent over the next 10 years—well short of the 60 percent needed to reach Goal 2025. To reach the Goal, Lumina estimates that another 19.8 million postsecondary credentials will need to be added. According to A Stronger Nation, there are three areas where action is most needed to move the attainment needle in America.

Key Tables from A Stronger Nation through Higher Education Report:

Related:
College-Attainment Rate Inches Up, but Not Fast Enough for Lumina | Chronicle of Higher Education | Apr. 9, 2015 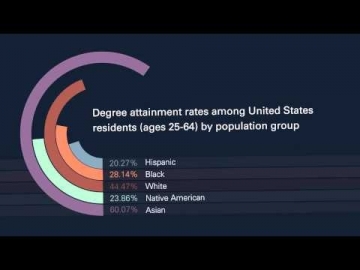 Find the attainment data for your state at StrongerNation.LuminaFoundation.org. 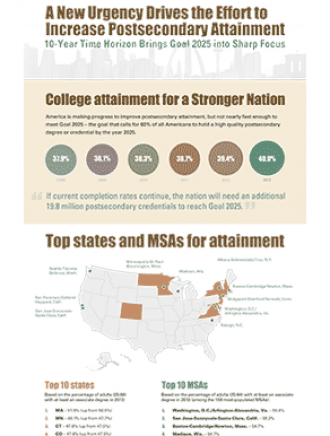