Supporting student parents is much more than providing child care

Supporting student parents is much more than providing child care

This article was originally published in Diverse Issues in Higher Education.

I wasn’t old enough to remember my mother carting me to campus at the University at Albany as an infant. When I asked her what it was like to be a young wife and mother in her senior year of college, she responded:

“That was so long ago. We were on our own! I never even told my professors that I had a baby.”

While it was indeed a long time ago, sadly, not much has changed in terms of support for student parents on campus. My mom remembers relying on her village of friends and family off campus to help care for me while she went to class and that there weren’t many campus support programs aimed at student parents.

I was a doctoral student at Indiana University’s Indianapolis campus when my son was born in 2013. Though the doctoral experience is very different from the undergraduate experience, there was little to no formal support for student parents there either.

Often, the conversation around support for student parents begins and ends with a child care center on campus; if a campus can afford it, it can check the box. If not, officials point to lack of funding—a barrier we all universally understand.

But supporting student parents is so much more than a child care center.

According to the National Center for Education Statistics, nearly one in four undergraduate students in 2015-16 were parents. About 40 percent were single mothers, and roughly 30 percent were fathers. Students of color, particularly Black students, are more likely than any other group to be parents. And because more college students are in their 30s or older, the number of student parents is almost sure to grow. This means that supporting student parents is no longer a nice thing to do. It’s an imperative part of a campus’ student success and equity considerations.

As #NationalStudentParentMonth ends, I’m encouraged to think about the myriad of other ways we can support the mothers and fathers on our campuses. A report published by the Education Trust last month found that in addition to child care, the cost of college remains a huge concern for student parents.

“A student parent would need to work 52 hours per week, on average, to cover child care and tuition costs at a four-year public college or university in the U.S.,” the authors found.

Not only that, but there is little data available on just how many student parents are on campus and what their needs are. As with other institutional priorities, it’s critical that colleges leaders work with student parents as partners in the solutions to their needs instead of developing programs that work around or, worse, to them. But we can’t collaborate if we don’t know who and where these students are.

Leaders across the higher education and philanthropy worlds have been discussing the cost of college as the number one barrier to college access for years. Still, without data on how many student parents there are, it is difficult to understand just how much of a cost-of-attendance gap we’re up against. In addition to increasing the national minimum wage and support for Pell grants, the report’s authors recommend that federal policymakers mandate data collection around student parents on campus.

Given the number of single parents who comprise this population, it’s also important for campuses to work to destigmatize being a parent on campus and make information about holistic support and basic needs readily accessible. Colleges should make a similar effort to proactively ensure student parents have information about services, just as they have to destigmatize mental health services. Some campuses even go as far as to mandate listing resources on course syllabi.

In addition to affordability and ability to access services, campus leaders should consider whether their environment is student-parent-friendly. Even something as simple as designating parking spaces closer to key buildings makes a huge difference for a parent who has to tote an infant in a car seat or push a stroller across campus. Are there study spaces that might welcome children and nursing rooms throughout campus? Is there messaging across campus that simply says, “Your child is welcome in this space,” and designated areas where parents might feel comfortable working alongside a playing or sleeping child?

For philanthropists, are we considering ways to invest in institutions to increase their capacity to better support student parents on campus?

We at Lumina are proud to join Ascend at the Aspen Institute to fund student parent success at Historically Black and Tribal institutions, but there is still so much more to do. I made it to where I am today because my parents created support for themselves outside of their campus. What would it look like for student parents to be successful because of our campuses and not despite them? 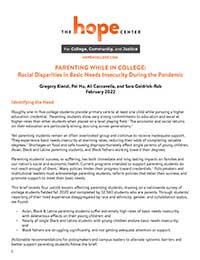 Parenting While in College 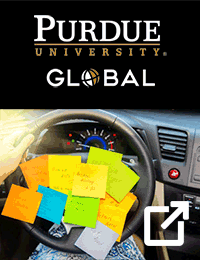 Resource center: Help for parents who work and go to college