For success in the new world of work, stress those ‘human’ skills

For success in the new world of work, stress those ‘human’ skills

We talk a lot about machines when it comes to changes in the workplace, but I like to talk about people.

As a guest on the show Inside Indiana Business recently, my message was that the nature of work is fundamentally changing, so workers must change and adapt. As humans, we need to tap our ability to be creative and empathetic, to be compassionate, to be collaborators. Those are the things that will make a difference, and as I told IIB host Gerry Dick, I’m an optimist. I think we can make this transition in Indiana and around the country because I think human work will ultimately define who we are as workers.

Consider Joel Lewis, an assembly-line worker who spent two decades essentially stuffing pistons into the engines of Dodge Ram pickups. Joel, who worked in Seymour, Indiana, and Columbus, Indiana, was the classic assembly-line worker. But along the way, the manufacturing process began to change. Cummins developed robots that perform tasks side by side with the people working on the line. They call them collaborative robots, or “cobots.”

Joel’s job has changed as his coworkers have changed – because the cobots are his coworkers. Joel now trains others in how to work with those machines, and he programs the cobots. So his job went from being a classic manufacturing position to one where he’s working side by side, collaborating with technologies.

Technology can be frightening in some ways. But in other ways, what we’ve come to recognize is that humans complement what machines do.

Mark and others like him are in a category of workers I call “creators” – the people who are highly inventive but also very skilled technically. We might not think of it that way, but professional wrestling is a highly technical pursuit, much like game design or choreography.

Over time, Mark has had to reinvent himself. Now in his 60s and retired from the ring, he’s training other wrestlers. He’s also an author and has his own podcast. In short, he’s reinvented himself as a human worker in a fun but interesting way.

COVID-19 has thrust us into the midst of a world-changing event. But this is our opportunity to fundamentally change the way we work and live, and going back to “normal” shouldn’t be our goal. What we need to do is use this unique moment in history to develop a better model – one that capitalizes on our unique capabilities as human workers.

Jamie Merisotis is president and CEO of Lumina Foundation. His new book, “Human Work in the Age of Smart Machines,” is now available. 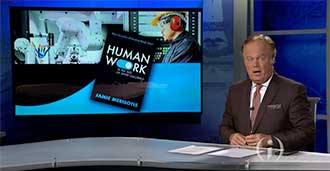 The future may be “now” as we evolve into the age of high tech, smart machines and artificial intelligence. Add to that, COVID-19’s impact on the workplace. How will all these factors affect Indiana’s workforce and what has higher education learned from the pandemic? We get answers from Lumina Foundation President and Chief Executive Officer Jamie Merisotis.
Jamie's Latest Book