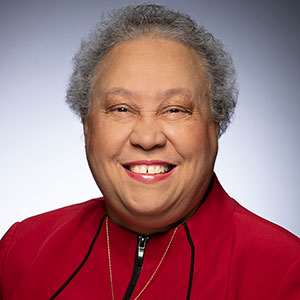 Belle S. Wheelan is president and CEO of the Southern Association of Colleges and Schools’ Commission on Colleges. She is the first African American and the first woman to serve in that capacity. Her career in higher education spans more than four decades and includes roles as a faculty member, chief student services officer, provost, college president, and secretary of education for the Commonwealth of Virginia. In several of those roles, she was the first person who is Black or a woman to serve.

She has been a member of many local, state, and national organizations such as Rotary International, Alpha Kappa Alpha Sorority, and the President’s Round Table of the National Council on Black American Affairs. She also has served on the boards of several organizations, including the ACT, the American Association of Community Colleges, Excelencia in Education, and the National Student Clearinghouse.

Wheelan has received numerous awards and recognition, including five honorary degrees and distinguished graduate awards from Trinity University and from the College of Education at the University of Texas. She was been named one of Washingtonian’s 100 Most Powerful Women; given the Woman of Distinction Award by the American Association of University Women; and presented with the American Association of Community Colleges’ Leadership Award.

Wheelan received her bachelor’s degree from Trinity University in Texas, with majors in psychology and sociology. She also has a master’s in developmental educational psychology from Louisiana State University and a doctorate in education administration, with a special concentration in community college leadership, from the University of Texas at Austin.