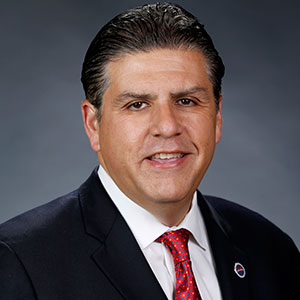 Castro, the grandson of immigrants from Mexico, son of a single mother, and the first in his family to graduate from a university, is a noted scholar and mentor in the fields of leadership and public policy. He is the first native Californian to be named president of Fresno State, where he also serves as a professor educational leadership.

Prior to his appointment as president in 2013, he served for 23 years in the University of California system. From 2006-2013, he was vice-chancellor of student academic affairs at UC-San Francisco. Earlier in his career, he held faculty or administrative leadership positions at four other UC campuses – Berkeley, Davis, Merced, and Santa Barbara.

He has received numerous honors and awards. In 2019, on behalf of Fresno State, he received an Excellence and Innovation Award from the American Association of State Colleges and Universities. In 2018, he was named as CSU President of the Year by the California State Student Association and City of Fresno District 4 Man of the Year. In 2017, he received the Mayor of Fresno’s Community Partnership Award.

In 2016, he received the Alumni Excellence in Education Award from the Stanford University Graduate School of Education and the Ohtli Award, the highest honor granted by the Mexican government to leaders in the United States.

Castro holds a bachelor’s degree in political science and a master’s in public policy from UC-Berkeley and a doctorate in higher education policy and leadership from Stanford University.