Summary Findings From a 2021 Survey by The Hope Center 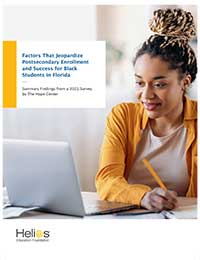 In Florida, there are stark racial disparities when it comes to postsecondary enrollment and success. Black Floridians are much less likely than individuals from other racial and ethnic groups to have completed a postsecondary education. For example, only 31 percent of Black Floridians, ages 25 to 64, hold an associate or bachelor’s degree. This rate is 11 percentage points lower than the overall degree attainment rate in Florida and 15 percentage points lower than the rate for White Floridians.

This report identifies some of the factors that influence postsecondary enrollment and success among Black students in Florida. The findings also reveal the extent to which the pandemic has exacerbated long-standing impediments to postsecondary access and attainment.