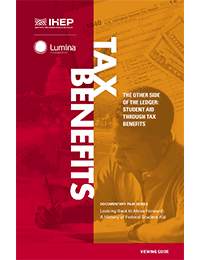 The Other Side of the Ledger

The Other Side of the Ledger: Student Aid Through Tax Benefits explains the history of tax benefits such as tax credits, tax deductions, and qualified tuition programs used to pay for higher education related expenses. In an effort to make college more affordable, federal lawmakers have proposed several approaches to make tax benefits—primarily aimed at the middle class—a viable way to supplement the direct student aid programs traditionally targeted at low-income students. Although these efforts began over half a century ago, it was not until the late 1990s that tax benefits for college expenses were written into the tax code. This 14-minute film details important legislative milestones and describes the growth of these benefits. 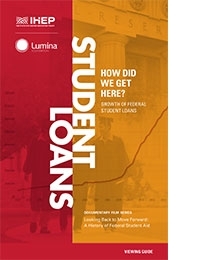 Student Loans: How Did We Get Here?

Viewing guide for part 1 of the documentary film series Looking Back to Move Forward: A History of Federal Student Aid. 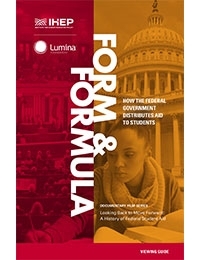 How the Federal Government Distributes Aid to Students

Viewing guide to accompany part 4 of the documentary film series Looking Back to Move Forward: A History of Federal Student Aid. 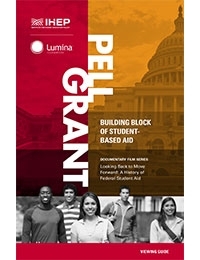 Chronicles the history of the program from its bipartisan legislative origins through its various selected subsequent iterations. This 14-minute film documents several key changes to the Pell Grant program including efforts to broaden and limit student eligibility, ebbs and flows in funding, increases in the maximum award levels, and the creation of supplemental programs for Pell recipients. 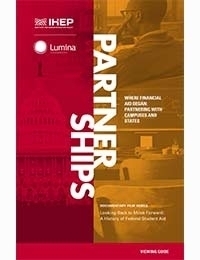 Partnering with Campuses and States

Where Financial Aid Began: Partnering with Campuses and States documents a history of these partnerships and the policies that shaped them—from the introduction of the original campus-based programs and state partnerships through their growth or decline over the years.

Continue Reading
LATEST NEWS & EVENTS
An updated map helps show the way along the learn-and-work highway
Communities in Indiana, Florida, and Ohio join 22 U.S. Talent Hubs
New Talent Hubs Serve Today’s Students
In a test of fairness more colleges seek SAT alternatives
The future of work is already here. Presidential candidates, policymakers and employers need to get onboard
Why adults quit college and how to bring them back
New Report: American Adults Cite Work-Related Issues  as Top Reason for Stopping Out of College
College credit where credit is due – the move toward ‘recognition for prior learning’
View All News & Events »
Menu