Are colleges stuck in the past and no longer beneficial for those seeking a good living? According to a recent survey, yes. Institutions of higher education must focus on outcomes and parental concerns.

A country sharply divided when it comes to fairness and politics is largely in agreement about ways to improve higher education. A new national survey finds broad support for public higher-ed funding, quick courses tied to in-demand jobs and improvements to raise the economic value of degrees.

Those are the most encouraging takeaways from the new USA TODAY/Public Agenda Hidden Common Ground research, supported by Lumina Foundation.

More concerning is the continued skepticism about the return on investment in education. And there’s a sharp note of distrust among the public: Most people think the economy is designed to benefit the wealthy.

In short, many Americans feel the system is rigged – and not in their favor. Why should they feel any differently about this country’s universities and colleges?

It turns out many of them don’t.

The report found that a slightly greater percentage of those surveyed believe “a college education is a questionable investment,” 51%, than think it is “still the best investment for people who want to get ahead and succeed,” 49%.

That’s far from an overwhelming vote of confidence. There are serious concerns around questions of access and outcomes, and many do not think lower-income and working Americans have a fair shot at getting a good education. Not surprisingly, therefore, most think college costs too much, takes too much time, and leaves too many graduates with heavy debt burdens.

Those in the survey said America’s universities and colleges are “stuck in the past” and not prepared to meet today’s challenges and opportunities. Worse, the report showed that twice as many think people who are qualified to attend college don’t have the chance, 67%, as believe the vast majority of those qualified do, 33%.

That tracks with sentiments regarding the economy, which 72% of people believe is rigged for the wealthy.

The lack of confidence cuts to the heart of our favorite national beliefs. Not long ago, a college education was considered a ladder to success, something those on the bottom rungs could use to climb upward. Many Americans no longer believe that.

Fortunately, the report also reveals ways to restore their faith.

Respond to concerns from students, parents

To some extent, we have a communications problem.

To that point, the report shows only lukewarm support for across-the-board increases in taxpayer support for public universities and colleges. But there is much greater enthusiasm for supporting programs with established records of success, in providing workforce training and creating enhanced job opportunities. There’s strong support for community colleges and certificate programs, seen as a better value by many in the survey. They also think these higher education choices leave students with proof they have marketable skills.

Put simply, students and families want evidence that they will see a return on their investment – no surprise, given the reasonable skepticism about the fairness of our economic and educational systems, which disproportionately work against Americans who are Black, Hispanic or Latino and Native American.

These are reasonable concerns, and the leaders of America’s colleges and universities would be wise to treat them as such. We at Lumina Foundation have said for years that institutions of higher education could increase confidence in their value by improving standards of both accountability and transparency around what students learn and how they can use their knowledge and skills.

Too often, schools focus on inputs – on the time and effort they have invested in educating students. They highlight the hours that a student has spent in the classroom or that faculty members have devoted to delivering classes. The amount of time and effort committed to teaching students doubtless is important to those who labor in universities and colleges. But it’s not as important to the students and parents who fill the classrooms and write the checks. What they want to know is what they will have to show for the time and money spent on college.

To their credit, more colleges and universities are shifting their focus to outcomes. They’re seeking to demonstrate that students have mastered marketable skills as a result of the time and money invested in going to college.

What if more schools emulated the valuable qualities highlighted in the national survey? They could focus on career readiness as part of a well-founded education and address concerns around affordability and access. Doing so would offer skeptical Americans reassurance they had something of value. They would show that the ladder to success still is sturdy and functional. That would make it easier for Americans who are wary of the costs of higher education to commit to sending students to college.

And this is just as important: America’s colleges and universities could send a signal that one of this nation’s institutions can respond to legitimate concerns and fears. 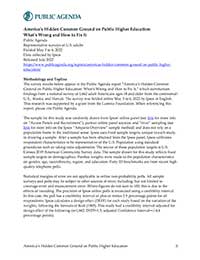