“Our education crisis compromises our workforce—this at the moment when the skills we need to compete for good-paying jobs are rapidly changing.”

Establishing a statewide goal to help raise Michigan’s post-high school education level will benefit everybody, not just those who get the training, Gov. Gretchen Whitmer said.

The governor, speaking in her State-of-the-State address, announced a plan to develop paths for workers and students looking for new opportunities. The goal is to raise the percentage of adults with learning or training after high school to 60 percent by 2030.

The current level is 44 percent, but that number reveals only part of the challenge of setting such an audacious goal. The learning for Michiganders of all races needs to improve. In order to reach the 60 percent goal, whites need to increase achievement by 18 percentage points, African-Americans by 34 and Hispanics (one of the fastest growing populations), by 35 percentage points. Closing these gaps will take resources and commitment.

Over 40 states have adopted similar goals—including North Carolina just this week—that have served to galvanize action around post-high school education. Support for these goals has come from employers, community leaders, policymakers, and taxpayers. Setting a goal helps to drive conversations around what Michigan values and how budget investment can support those values. Growing the economy by making sure that Michiganders have access to high-quality education and training after high school is vital to Michigan’s resurgence.

“Our education crisis compromises our workforce—this at the moment when the skills we need to compete for good-paying jobs are rapidly changing,” the governor said.

Whitmer described a recent meeting at the Detroit Auto Show with auto executives who said their top challenge was finding talent.

“They used to need auto engineers. Today, they need software engineers and developers and skilled tradespeople, too,” she said. “The skills gap poses a serious economic challenge for us.”

“Together, these paths will go a long way toward closing the skills gap, making Michigan’s economy more competitive, and creating real opportunity for everyone. If you’re willing to put in the work, you will have a path to succeed,” she said.

The working adult education program “Michigan Reconnect,” modeled after the successful Tennessee Reconnect initiative, could lead to dramatic increases in Michiganders earning workforce credentials with labor market value. Currently, only 4 percent of Michigander have these types of high-quality certificates—significantly below the national average.

“The vast majority of today’s jobs require some form of postsecondary education, whether it’s a degree or a skills certification. But, as of 2016, only 44 percent of our workforce has such a credential,” she said. Coming out of the recession, 99 percent of the new jobs created in the U.S. required some form of post-high school education.

Whitmer would need support from the legislature to fund the programs. During the campaign, she indicated they would cost less than $100 million total. This relatively modest investment would serve Michiganders well in helping to close achievement gaps and reach an ambitious attainment goal. Bravo Governor Whitmer for taking on this challenge. 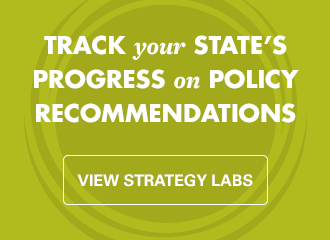