Report: Adults, Black students completing college at higher rates than ever before

Report: Adults, Black students completing college at higher rates than ever before

There is welcome news in a report issued this week from the National Student Clearinghouse. The six-year college completion rate for first-time students attending college full- or part-time and earning bachelor’s and associate degrees is up to 62.2 percent, a 1.2-point increase over the previous (2014) cohort of entering students.

Even better, rates of successfully earning degrees are not just up among those students who begin college on residential campuses after graduating high school. Completion rates also rose among students who were older, more racially and ethnically diverse, and attended local community colleges to earn associate degrees.

In response to today’s talent economy, 46 states have established goals for increasing educational attainment after high school. Those efforts are similar to Lumina’s own target: that by 2025, 60 percent of adults will have college degrees, certificates, industry-recognized certifications, or other credentials of value.

Several factors are at play, including a higher percentage of 18- to 22-year-old students in the 2015 student cohort, more students starting their educational journeys at bachelor’s-granting institutions, and, possibly, better academic and financial supports for students, especially students of color. Completion rates increased among Black, Hispanic or Latino, and white students, with Black students experiencing the largest increase—a jump of nearly 2 percentage points, to 44.3 percent.

The Clearinghouse’s Research Center released the figures in “Completing College: National and State Reports,” which tracked the fall 2015 cohort of 2.37 million beginning college students through mid-2021, several months after the onset of the COVID pandemic.

Researchers were able to follow students who transferred from institutions they had started at. Today’s students are increasingly mobile, even moving across state lines, stopping out, and switching from full- to part-time and back. The Clearinghouse collects data from more than 3,600 colleges and universities representing 97 percent of the nation’s students in higher education as of 2020.

The recent trend of more students enrolling in college straight out of high school continued with the 2015 cohort, with six of every seven students entering upon graduation. College completion rates increased among students of all ages, especially among these students.

However, adults older than 24 when they enrolled in college experienced an impressive 2.5 percentage-point increase in their completion rate, with the largest increases among those attending public community colleges and four-year institutions. These students, comprising almost 9 percent of the 2015 student cohort, finished at a 50.5 percent rate within six years—with rates of 57.7 percent among students at four-year institutions and 37.9 percent among those at community colleges.

Students who started at community colleges experienced a six-year cohort completion rate of 42.2 percent. That’s a 1.5-point gain among the 31.3 percent of all entering students in 2015 who went to community colleges—the most significant increase of any sector in higher education. And another important development as adults seek to reposition themselves in a tumultuous economy by taking advantage of the education and training these institutions offer.

Today’s news is certainly good, but it is also a reminder that during these uncertain times we need to continue to focus our efforts on supporting all students to and through completion to ensure these rates continue to increase and no one is left behind.

Courtney Brown is vice president of impact and planning for Lumina Foundation, an independent, private foundation in Indianapolis that is committed to making opportunities for learning beyond high school available to all. 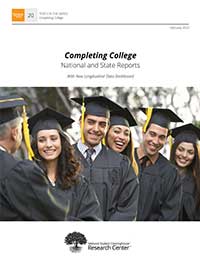