We can reverse the enrollment plunge to avoid the ‘permanent gap’ in U.S. education

We can reverse the enrollment plunge to avoid the ‘permanent gap’ in U.S. education

A drastic decline in the number of people going to college in the past two years threatens America’s economic health and is worsening the nation’s racial divide in educational achievement, experts on a Lumina webinar told us.

“It’s easy to talk about the poor and the low-income population that community colleges typically serve, but the decline in four-year schools seems to represent a different phenomenon—one that reflects not just the pandemic, but growing concerns about the value of a four-year degree,” he said.

James Kvaal, U.S. undersecretary of education, said it’s difficult to recapture those who “step off the path,” and he worries the nation might be facing “a permanent gap here in our country’s educational attainment.”

Data from the National Student Clearinghouse show that the number of college students fell by more than 900,000 in the past three years. Most would have been incoming freshmen.

The reasons for not enrolling vary: Some would-be college students took gap years to recover from pandemic burnout of virtual learning and two years of social distancing, masking, and limited in-person interaction. Others gained new responsibilities and cared for younger siblings, parents, or older family members. Others took advantage of a welcoming job market and chose to enter the workforce before going to college.

But freshmen aren’t the only age group choosing to skip college. An upcoming study sponsored by Lumina Foundation shows one in three college students reported it was “difficult” to “very difficult” to remain enrolled in the fall 2021 semester.

Caregivers, those from low-income households, and multiracial and Hispanic and Latino students reported the most damaging outlooks. Emotional stress was the biggest reason students cited when they considered leaving school. For high school students and those already enrolled in college, the pandemic isolated them from mental health services previously available on campus.

The enrollment crisis only exacerbates gaps in higher education and leads to more inequities. The steepest enrollment declines have been at community colleges and among men of color. However, National Student Clearinghouse data show that while community colleges bore the greatest brunt of the hit in the first year of the pandemic, with 85 percent of the total enrollment losses being at two-year institutions, in year two, the losses were almost evenly distributed as four-year institutions made up nearly 50 percent of the total loss.

A September 2021 study from the Association of American Colleges and Universities and Bipartisan Policy Center found that four in 10 Americans don’t believe a college degree is worth the time and money. And it’s becoming an increasingly partisan issue too; seven in 10 Democrats, 53% of Republicans, and 52% of Independents would rank a college degree as “probably” or “definitely” worth it.

“The reality is there are students out there who are worse off for having gone to college because they’re left with debt or no degree, or a degree that didn’t lead to a good job,” Kvaal said to Lumina President and CEO Jamie Merisotis during the webinar.

To chip away at the crisis, institutions should focus resources on students with some college credits but no degree. In some cases, this will require examining why students choose not to enroll. For example, if a student has outstanding library fines or unpaid parking tickets hindering them from re-enrolling, the university might look at other options for those debts.

About one-third of the students are military-affiliated because the university is located near Fort Bragg, so FSU is versed in thinking about the needs of adult learners and students from various backgrounds. FSU also has an emergency fund, a state-subsidized tuition model capping tuition at $500 per semester for in-state and $2,500 for out-of-state students, and a commitment to understanding the needs of diverse students.

But it’s more than access and getting students in the door. With the help of philanthropy, higher education has an opportunity to reframe its model from a teaching and research-centered model to a learner-centered one.

Aaron Thompson, president of the Kentucky Council on Postsecondary Education, challenged others on the webinar to think about critical questions about student needs and how to meet them—and make sure cultural competency is at the center of the solutions.

And at San José-Evergreen Community College District in California, Chancellor Raúl Rodríguez said his team made a concerted effort to reach out to every student who should have re-enrolled but didn’t to ask how the college could best support them during the pandemic.

The school boosted funding to offer all students tuition-free classes over the past year, and plans to continue that for the fall semester. Leaders at the college have also strengthened relationships with local nonprofits and neighboring K-12 school districts to help create resource hubs for students and their families who may be struggling with some of the financial fallout of the pandemic, as well as training centers to help re-skill some of the adult learners in the community.

At this turning point in higher education, we recognize it’s not too late to improve the outcomes for our students and our communities. Doing so means reversing the slide in enrollment by making sure students get all the support we can give them to stay in school

Back to News
Our Nation's Enrollment Plunge 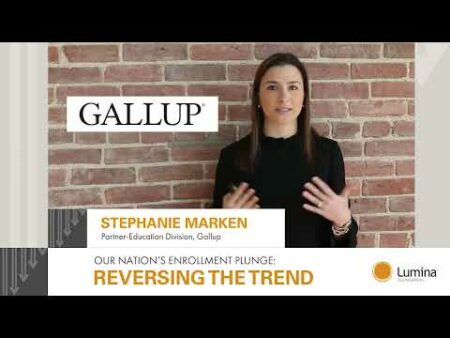 A recording of the first 2 hours of the event