Mr. Merisotis is a globally recognized leader in philanthropy, education, and public policy. Since 2008, he has served as president and CEO of Lumina Foundation – an independent, private foundation that is committed to making opportunities for learning beyond high school available to all. He previously served as co-founder and president of the nonpartisan, Washington, D.C.-based Institute for Higher Education Policy, and as executive director of a bipartisan national commission on college affordability appointed by the U.S. president and congressional leaders 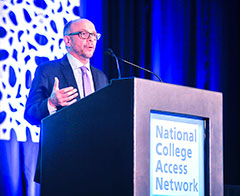 Marlene Ibsen, president of the NCAN board of directors and president and CEO of the Travelers Foundation, presented the award to Mr. Merisotis.

“Jamie is a first-generation college graduate and Pell Grant recipient himself,
and he has devoted his entire career to achieving systemic improvements in postsecondary education, helping many more Americans get the degrees and credentials they need to support their families and keep our economy growing,” said Ms. Ibsen.

At Lumina, Mr. Merisotis has led a movement to help states and communities examine their postsecondary education needs and policies and to connect the dots between higher education credentials and workforce development. Through extensive public speaking and writing, Mr. Merisotis has made the case that states can and must do more in this respect. Over the last decade, almost every U.S. state has set a statewide attainment goal, specifying the share of its working-age population that should receive a postsecondary credential or degree. 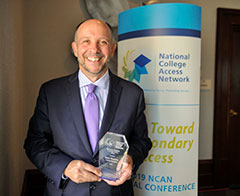 After receiving the award, Mr. Merisotis shared about his experience as a first-generation college graduate and emphasized the importance of expanding postsecondary opportunities to all of today’s students. To increase attainment and expand the pool of talent in the U.S. workforce, he said we must redouble our efforts to reach those populations that are too often left out or left behind when it comes to postsecondary access and success: adults, people of color, and those struggling to afford college.

“Frankly, unless we serve all learners with the interest and ability, it will be impossible to reach our goal of increasing attainment,” he said.

Mr. Merisotis summarized his vision for a higher education system that would more effectively meet the needs of all of today’s students: “We need a system that’s affordable, accessible, inclusive, transparent, and accountable. It must offer clear, multiple pathways to learning with fewer obstacles and off-ramps.”

In closing, Mr. Merisotis offered words of encouragement and thanks to the many NCAN members and partners in attendance.

“As one champion in an entire room of champions, I want to thank you for everything you’re doing to make my dream and the dreams of millions more people like me come true.”

Past recipients of the Bob Craves Champion of College Access Award include: