INDIANAPOLIS–Lumina Foundation has announced the election of Morgan State University President David Wilson, Ed.D. to serve on its board of directors.

Wilson has served as president of Maryland’s public urban university since July of 2010 and has a record of accomplishment during his more than 30 years of experience in higher education administration. 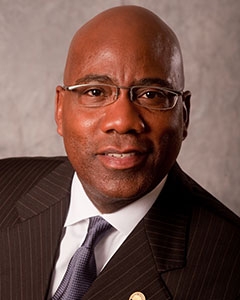 “David is a nationally regarded leader in higher education, and his broad background will add a welcome voice to our work toward the attainment agenda,” said Jamie Merisotis, president and CEO of Lumina Foundation.

The U.S. Undersecretary of Commerce for Standards and Technology appointed Wilson to a three-year term on the National Institute of Standards and Technology’s Visiting Committee on Advanced Technology. He also is president of the HBCU-China Scholarship Network. In addition, he serves on the boards of the Maryland Cybersecurity Council, the Maryland Longitudinal Data System Center, The Greater Baltimore Committee, the Association of Public and Land-grant Universities, and the Association of American Colleges & Universities. In February 2010, President Barack Obama appointed Wilson to the President’s Board of Advisors on HBCUs.

Since Wilson’s arrival at Morgan State in 2010, the university’s progress has continued unabated. Among the many highlights of Wilson’s tenure to date are: increasing a second-year retention rate above 70 percent for the seventh consecutive year; growing enrollment to nearly 8,000 students; procuring the university’s largest-ever research contract; overseeing a 183 percent increase in alumni participation in giving since 2010; creating a new West Campus; guiding $271 million of campus construction; founding a School of Global Journalism and Communication; establishing Morgan State’s first online degree program; winning designation of the university as a National Treasure by the National Trust for Historic Preservation; and receiving a General Assembly’s designation of Morgan State as Maryland’s preeminent public urban research university.

Wilson grew up with 10 siblings on a tenant farm outside of McKinley, Alabama. Through hard work, tenacity, and the encouragement of his father and teachers, he became the first person in his family to attend college.

“I’m truly honored and humbled to have been elected to serve in this capacity, and I look forward to joining the voices of the other members of the board in offering creative insights to Lumina Foundation on how best to achieve its goal of ensuring that 60 percent of Americans receive a high-quality college degree, certificate or credential by 2025,” said Wilson.

About Lumina Foundation:  Lumina Foundation is an independent, private foundation in Indianapolis that is committed to making opportunities for learning beyond high school available to all. Lumina envisions a system that is easy to navigate, delivers fair results, and meets the nation’s need for talent through a broad range of credentials. The Foundation’s goal is to prepare people for informed citizenship and for success in a global economy.