From front page headlines to the opinion section, few issues are more at the center of the national political dialogue than immigration. Just consider this letter to the editor published in a newspaper:

“To open the immigration floodgates in American now would only weaken us by drastically altering our national, racial, and cultural composition…”

But that’s not today’s paper. It’s from The Indianapolis Star in 1965, just before President Lyndon Johnson signed a major reform to the nation’s immigration law, which had favored northern and western Europeans over those from elsewhere. Johnson said the new law repaired “a very deep and painful flaw in the fabric of American justice.”

Read the full op-ed at The Hill 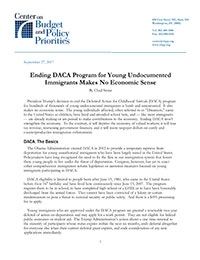 How Many Unauthorized Immigrants Graduate From U.S. High Schools Annually?