Chapter 1: How Did We Get Here?

“How Did We Get Here: Growth of Federal Student Loans” follows the expansion of the federal student loan program throughout the years, from its origins in helping middle-income students afford a college education to an eventual rise in student loan borrowing. This 15-minute film chronicles:

6 Decades The first federal loan program, the National Defense Student Loan, now the Perkins Loan, was created in 1958.
43 Million Outstanding Loans 1 in 6 American adults today has some kind of student loan debt.
66% of first-time bachelor’s recipients borrowed for their educations in 2007-08, up from 49% in 1992-93.
RUNTIME: 15:16
Download Our Viewing Guide
Read More Below
Watch Chapter 2 Video
We’ve seen an interesting evolution in terms of the student loan programs—from creating greater access to loans to ensuring that defaults don’t happen, to what we have now, which is this interest in debt.
Jamie Merisotis, President and CEO, Lumina Foundation
Executive Director, National Commission on Responsibilities for Financing Postsecondary Education, 1991–93
Establishing Loans
Federal student loans have their origins in efforts to help middle-income families afford a college education.
1956
Massachusetts Higher Education Assistance Corporation (MHEAC) started a guaranteed student loan program in Massachusetts, which insured students’ bank loans with money raised through philanthropic donations from local businesses. This program provided a model for a future federal student lending program.
1958
The National Defense Education Act (NDEA) created the National Defense Student Loan (NDSL) Program, the first federal loan program, now called the Federal Perkins Loan Program. Distributed to students by institutions, these loans required a monetary match from institutions.
1965
The first Higher Education Act (HEA) created Guaranteed Student Loans (GSL), a public-private partnership with the federal government subsidizing capital from banks to provide loans to low- and middle-income students.
The extent to which people should be relying on loans, and the extent to which they should be subsidized by the government, is something that we’ve come to not by design so much as by accident and political dictates and the dictates of the federal budget.
Sandy Baum
Independent Consultant
The College Board, 2004–13 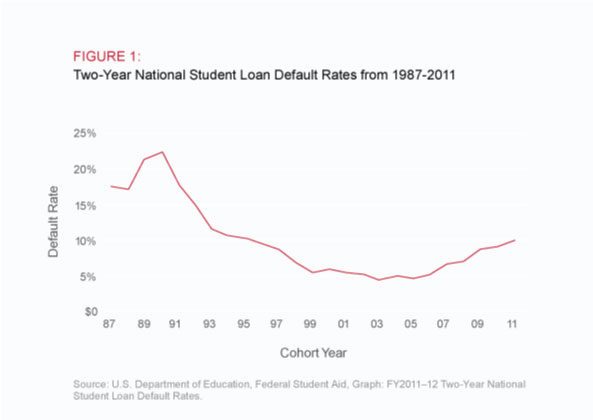 Growth of Lending
In the 1970s, federal loans quickly rose in volume due to the rise of college costs, creation of government-sponsored enterprises, establishment of state loan guarantee agencies, and expansion of loan eligibility and limits.
1972
The HEA Reauthorization Act created the Student Loan Marketing Association (eventually Sallie Mae), originally to add liquidity to the GSL program by buying loans from lenders to add more capital.
1976
HEA Reauthorization provided incentives for states to establish loan guaranty agencies, which insured federal student loans made by lenders.
1978
The Middle Income Student Assistance Act (MISAA) eliminated the income requirement for student loans, allowing middle- and high- income students to qualify for loans. The act was repealed in 1981, but other income expansions followed.
1980
As part of the 1980 HEA reauthorization, the PLUS program was created to allow parents to borrow for their children’s education.
1981
The Omnibus Reconciliation Act repealed MISAA, replaced the PLUS program with Auxiliary Loans to Assist Students (ALAS) and extended borrowing to graduate and independent undergraduate students. It also imposed borrower loan origination fees on new loans.
It began to really grow in the ‘70s and ‘80s, and with the growth came a whole series of problems.
David Evans
Professional Staff
U.S. Senate Health, Labor, and Pensions Committee, 1978–96 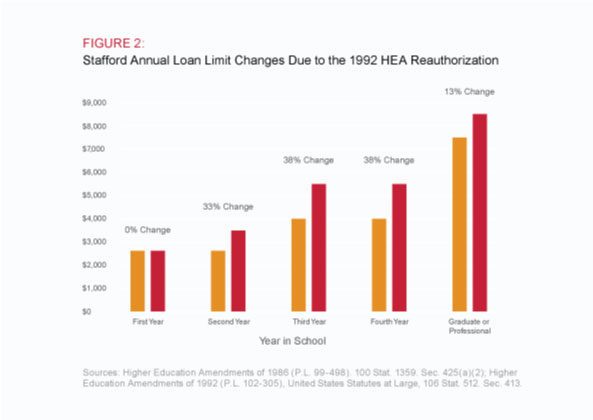 Accountability
Concerns about default rates on student loans led Congress to implement a number of policies meant to reduce these rates.
1986
The HEA Reauthorization of 1986 added provisions prohibiting students in default under GSL from receiving new federal loans. It also gave the Department of Education more power to regulate student loan lenders. It split ALAS into the Supplemental Loan to Students (SLS) for graduate and independent students and brought back PLUS loans for parents. It also created consolidation loans, but borrowers who had different lenders could not consolidate (known as the single holder rule).
1990
The Cohort Default Rate was established, eliminating student borrowing eligibility at schools with high default rates for three consecutive years. The way this is calculated has changed over the years.
1992
In the 1992 HEA Reauthorization, direct lending was introduced through a demonstration program that made unsubsidized Stafford loans available to all students, and removed annual and aggregate borrowing limits on PLUS loans. This act also restructured Stafford loans and PLUS loans into the Federal Family Education Loan (FFEL) Program. 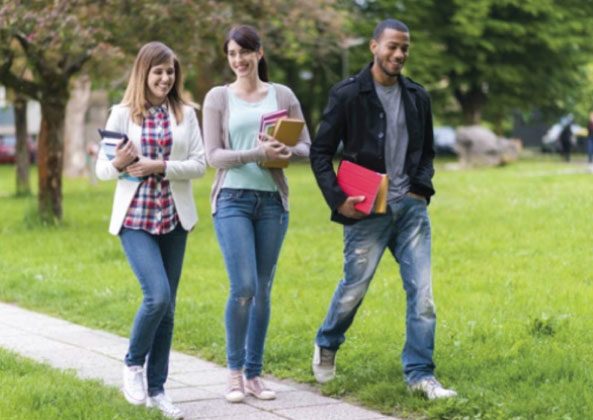 We finally got to the point, in the early ‘80s, when the volume was so great, people for the first time began to worry about A.) default rates, and B.) cost to the government.
Thomas Parker
Co-Founder and President,
The Education Resources Institute, 1981–2001 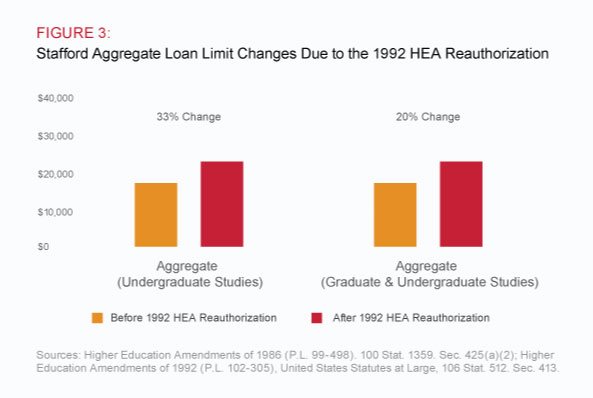 Repayment
As limits on borrowing were increased and college costs were rising, many students were having trouble repaying loans through the standard repayment plan.
1993
The 1993 Omnibus Budget Reconciliation Act formally called for a phasing-in of the Direct Loan Program to begin in 1994. It also established Income-Contingent Repayment, Extended Repayment Plan, and Graduated Repayment Plan for Direct Loan Borrowers.
1998
The Income-Sensitive Repayment Plan for FFEL borrowers was established, allowing FFEL borrowers to be eligible for extended and graduated plans.
2005
The Higher Education Reconciliation Act allowed for professional and graduate students to borrow through the PLUS program.
2006
The Emergency Appropriations Act repealed the single holder rule, allowing borrowers to consolidate loans between lenders.
2007
The College Cost Reduction and Access Act (CCRAA) established the Income-Based Repayment Plan.
2008
The Higher Education Opportunity Act (HEOA) mandated that cohort default rates be calculated to include students in default three years after entering repayment and that the U.S. Department of Education publish those rates. The Ensuring Continued Access to Student Loans Act (ECASLA) temporarily authorized the U.S. Education Department to buy loans from private lenders to ensure students had access to capital during the financial downturn.
2010
The Health Care and Education Reconciliation Act (HCERA) repealed the FFEL programs so that all new federal student loans–except for Perkins Loans—would be made directly from the government to students, saving administrative costs. The terms of the IBR are revised by Congress to lower the payment cap and forgive loans five years sooner than previously for a limited subset of students (those taking out their first loans after July 1, 2014).
2011
The Obama Administration created the Pay As You Earn (PAYE) plan via executive order, extending more generous IBR terms to a larger group of borrowers. The Budget Control Act eliminated subsidized loans for graduate students.
2014
The Obama Administration, via executive order, expanded the PAYE plan to individuals outside of the original 2011 scope to all borrowers with direct loans.
The idea of creating more lenient, more workable, more flexible repayment options became a very important priority and we began to see those incorporated.
Barmak Nassirian
Director of Federal Relations and Policy Analysis
American Association of State Colleges and Universities, 1990–98, 2013–present 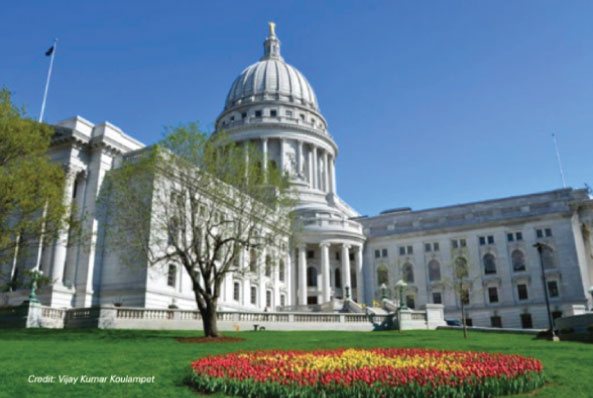 Current perceptions of college affordability, student aid, and student debt are, to a great extent, outgrowths of the financial crisis of 2008 and the ensuing recession. Take a look at The College Board's most recent report about trends in student aid.

The above document, created by The Institute for College Access & Success, summarizes the interest rates, loan limits, and other terms for federal student loans issued from July 1, 2016 through June 30, 2017.

The number of consumers age 60 and older with student loan debt has quadrupled over the last decade in the United States, and the average amount they owe has also dramatically increased. Learn more using the link above.

The Condition of Education 2017: Loans for Undergraduate Students