PARTNERING WITH CAMPUSES AND STATES

Skin in the Game

The federal government has historically leveraged funds for both states and colleges to expand access and opportunity to higher education. “Where Financial Aid Began: Partnering with Campuses and States” documents a history of these partnerships and the policies that shaped them—from the introduction of the original campus-based programs and state partnerships through their growth or decline over the years. The federal programs covered in this 10-minute film all require a monetary match from states and colleges, thereby expanding the reach of federal financial aid.

30
Million
Students have benefited from collegiate work-study programs since their inception in 1964.
48
States have need-based financial aid programs to supplement Pell, as of 2014-15.
RUNTIME: 10:19
Download Our Viewing Guide
Read More Below
Watch Chapter 3 Video
The campus-based aid programs were designed to get colleges to also develop their own grant, loan, and work programs that would be based on need. We also want to change the way that institutions package aid, and we want to change the way that states package aid.
SARAH FLANAGAN
professional staff, U.S. Senate Health, Education, Labor and Pensions Committee, 1987-93
Campus-Based Aid Partnerships
Although campus-based programs were always intended to give institutions governance over financial aid, the ways in which funds are distributed to institutions have changed throughout the decades.
1958
The National Defense Education Act created the Federal Perkins loan program, originally known as the National Defense Student Loan (NDSL) program, which provided low-interest loans to low-income students for college. Loans were distributed via institutions rather than made directly to students.
1964
The Economic Opportunity Act created the Federal Work-Study (FWS) program, originally known as the College Work-Study (CWS) program. FWS provided funding for part-time employment either on- or off-campus to help low-income students cover the cost of postsecondary education.
1965
The Higher Education Act of 1965 created the Federal Supplemental Educational Opportunity Grant (FSEOG), originally known as the Educational Opportunity Grant (EOG). These grants went to undergraduate students who demonstrated “exceptional financial need.” The Federal Perkins loan program and FWS were transferred to the HEA.
It’s probably a good idea for institutions to have some—as we say—skin in the game. When an entity has to provide some of its own resources in order to get a larger share of resources, that’s a pretty good way to help ensure that larger resources—in this case, the Federal portion—will be well spent.
Daniel Madzelan
Senior Staff
U.S. Department of Education, 1978-2012 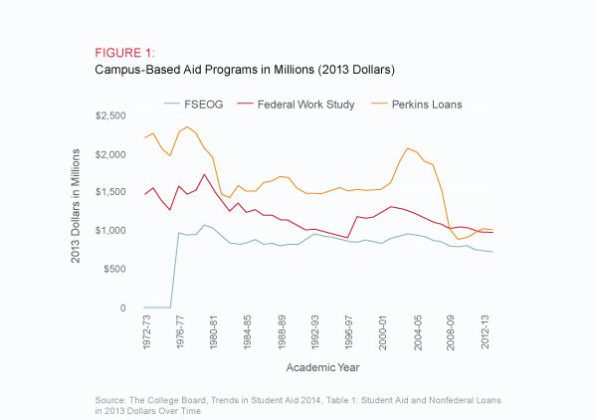 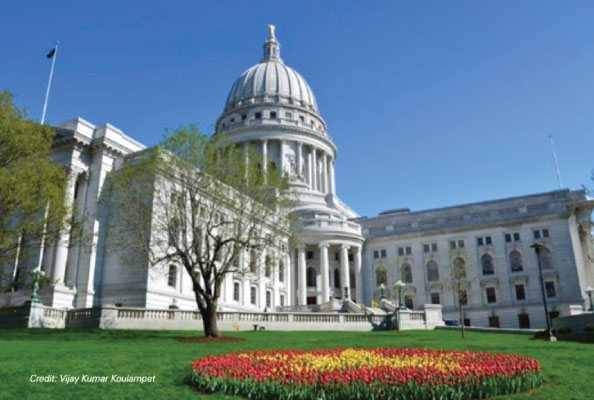 There were always debates on the efficacy of LEAP and SSIG. The primary debate was whether it was meant to be a temporary program or not. Then there was another series of debates when community service came in and was very popular in the early ‘90s. That provision was put in on SSIG, again always trying to find a new way to reinvent the program so it would sustain itself.
Sarah Flanagan
Professional Staff
U.S. Senate Health, Education, Labor and Pensions Committee, 1987–93 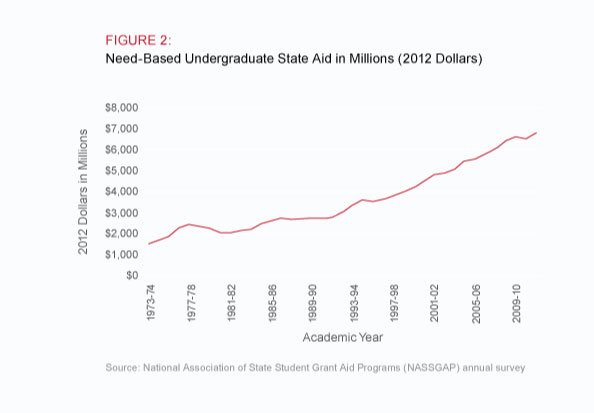 Federal and State Funding of Higher Education: A Changing Landscape

States and the federal government have long provided substantial funding for higher education, but changes in recent years have resulted in their contributions being more equal than at any time in at least the previous two decades.

Campus-based programs are unique among need-based federal student aid programs in that federal funds are awarded to institutions of higher education according to formulas that take into account past institutional awards and the aggregate financial need of students attending the institutions.

A Brief History of the Federal Work-Study Program