Inside the Big Confusing Credentialing Tent: A New Mission to Understand Non-Degree Credentials

Inside the Big Confusing Credentialing Tent: A New Mission to Understand Non-Degree Credentials

The number of credentials used to document education and training has grown—but so has the confusion about what they mean.

Nor are employers likely to write a job description calling for people with “alternative credentials” or “non-degrees.”

Beyond that, many of us don’t like these terms because they imply the credentials are second-class, even as we sometimes struggle to understand their precise value.

But there’s some light in the form of new research, including a new report from Strada Education Network and Lumina Foundation based on data from the Strada-Gallup Education Consumer Survey (a nationally representative poll of 50,000 U.S. adults ages 18 to 65). The poll found non-degree credentials result in greater marketability, employment rates, incomes, and happiness with one’s educational and career path.

“This new report shows that degreed higher education isn’t the only viable path into a good career,” said Anthony Carnevale, director of the Georgetown University Center on Education and the Workforce. “Oftentimes short-term certificates and industry-based certifications get the job done quicker, better and cheaper.”

What type of credentials fits within the “non” world?  Most definitions include certificates, industry certifications, licenses, and apprenticeships. Many think that badges should be included as well.

Given the growing interest in the burgeoning marketplace of non-degree credentials, a new network has been created: the Nondegree Credential Research Network (NCRN). The Network began as informal get-togethers of several researchers who have been conducting research on non-degree credentials. The group has been sharing research findings and brainstorming about future work. Interest and attendance have been growing, so the group explored expanding the geographic scope and establishing a formal network. Lumina Foundation stepped up to provide support for the NCRN to expand and meet several times over the next two years.

What’s unique about the NCRN is that it doesn’t include only researchers. It is inviting relevant experts from education and training providers, certification bodies, state and federal government agencies, employers and associations of all types—the users of research information—to meet with researchers.

“This mix is important,” notes Stephen Crawford, Director of the NCRN and a research professor at George Washington University’s Institute of Public Policy. “We all tend to operate in silos. University-based scholars tend not to talk to think-tank, association, and government researchers. And those conducting research on one kind of credential—community college certificates for example—tend to be uninformed about other kinds, such as certifications. That’s fine for certain purposes, but not for building a more comprehensive understanding of the credentialing ecosystem—its strengths and weaknesses, how it’s changing, and how to make it function more effectively for students, workers, and employers.”

The launch meeting of the NCRN was held in Washington, D.C. in April. The opening message to the some 85 assembled: We need to understand what these credentials are, why they’re important, whether they’re here to stay, and how they can grow in importance in our rapidly changing future of learning and work.

The goals for the launch meeting:

“There’s a confusing array of new and alternative credentials, some of which may be good or promising but about which we know far too little,” Crawford said. “So, the need for research on non-degree credentials is urgent. We hope that as individual researchers and as a research community, the NCRN will identify and fill the knowledge gaps around non-degree credentials.”

The members of the NCRN will set the agenda. The strategy is to bring the right people to the table and let their pooled wisdom guide the choices about how to proceed—about what research questions are most promising, who else to involve and how subsets of researchers and users of the research may wish to collaborate on specific projects.

To assist the discussions, Kyle Albert, an assistant research professor at the George Washington Institute of Public Policy, drafted “What We Know About Non-Degree Credentials: A Literature Scan” to provide context to these issues.

The NCRN has launched. Now the work begins. A network of researchers and user stakeholders will study the many pressing questions surrounding the “non” world, and help us all understand more about the mix of credentials that live within the large, confusing credentialing tent.

Originally published at The evolllution.com. 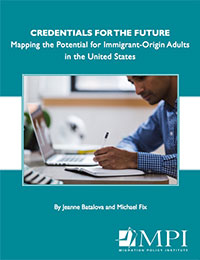 Credentials for the Future