INDIANAPOLIS —Lumina Foundation today announced that 19 colleges and universities will receive grant awards totaling $625,000 from its Fund for Racial Justice and Equity, a project of Rockefeller Philanthropy Advisors. The Fund was created after last year’s racially motivated violence in Charlottesville on the campus of the University of Virginia.

In December, with support from its board, Lumina committed to funding these one-time grants—ranging from $25,000 to $50,000—in response to what the foundation saw as an urgent need to improve the atmosphere around race on campuses across the country.

“As a philanthropic leader, Lumina shares a deep passion and concern about the nation’s racial climate, especially on college campuses,” said Jamie Merisotis, president and CEO of Lumina Foundation. “These campuses have shown a willingness and capacity to address racial disparities at a systemic level. They recognize that achieving equitable results is about more than promoting diversity—it’s about whether the institution fosters a climate in which every student feels welcome and has the same opportunity to earn a degree or certificate of value, regardless of race or ethnicity.”

In partnership with Rockefeller Philanthropy Advisors, Lumina evaluated 312 grant applications submitted in response to a request for proposals, indicating a strong desire throughout higher education to improve campus culture through community dialogues, faculty and staff development, and other creative approaches. Lumina received proposals from a wide breadth of colleges and universities, including two- and four-year, public and private, large and small, and minority-serving institutions.

Approaches to fostering more constructive racial dialogue varied, but successful proposals share some features. The colleges and universities receiving financial support recognize there’s no quick fix to addressing issues of race on campus, and that they must take responsibility for unjust conditions and for improving them. Successful applicants also advanced ideas that will give students a clear voice in shaping changes to their college experiences that could ultimately help eliminate unfair and unequal educational outcomes, especially among African-American, Hispanic, and American Indian students. Some successful proposals also addressed the broader issue of curricular change and faculty development to assure that all students learn about our nation’s history of racism and struggles for racial justice.

“We are proud to support the efforts of colleges and universities to improve conditions for students of color, which is a precursor to achieving racial justice and for closing gaps in educational attainment,” said Danette Howard, Lumina’s senior vice president and chief strategy officer. “We know that improvements to campus climate benefit all students, Improving the environment in which students learn and eliminating disparities in outcomes across racial groups has to become a core function of every institution, and it must be done with students at the center.”

To further advance work toward improving campus climate nationally, Lumina also awarded a $1 million grant to Rockefeller Philanthropy Advisors to support the Race and Equity Center at the University of Southern California. Shaun Harper, one of the country’s leading scholars on diversity and inclusion on college campuses, runs the center in Los Angeles.

The Center brings together professors from across USC who study people of color, racial inequities, immigration, and related topics. Lumina’s grant will support equity institutes on 10 college campuses to train senior campus leaders as well as the National Assessment of Collegiate Campus Climates, a quantitative annual survey of hundreds of colleges and universities that will gauge students’ feelings of inclusion and overall racial climates. 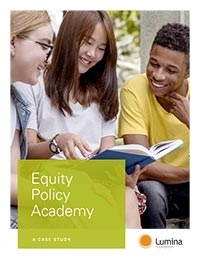 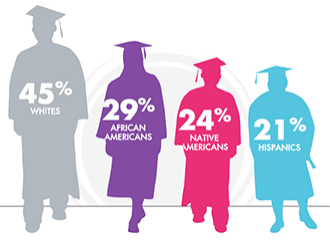