While today’s college students are experiencing the uncertainties caused by a global pandemic, racial injustice, and high unemployment rates, those same circumstances present the opportunity to build one of the most resilient and influential graduating classes in recent history, according to Wayne A.I. Frederick, president of Howard University.

“We will have a very gilded and golden generation that will be produced as a result of this,” Frederick predicted during a recent webinar hosted by Lumina Foundation.

“People tend to go to colleges to retool and re-engineer their skill sets during times like this,” he said. “I would say to students, ‘You have to stay the course; it’s going to be worth it on the other end of this. The opportunities that will come out of this generation that goes to college will change the world in a way that we finally needed it to change.”

Frederick joined David Wilson, president of Morgan State University, Walter Kimbrough, president of Dillard University, and Danette Howard, Lumina senior vice president and chief strategy officer, in a discussion about how to ensure student success during this turbulent period, as well as how HBCUs have been consistently effective in combating racial inequities and contributing to the economy.

During the webinar, Frederick also pointed to the long record of HBCUs in addressing the nation’s problematic history with racism and inequity. For example, he said, HBCUs are more committed to preparing a greater number of Black students for the medical field than other institutions.

How should we be (re)thinking student debt among Black borrowers?

“Howard, over a 10-year period, sent as many African American students (to medical school) as MIT, Stanford, and Yale,” he said. “If you really want to diversify the workforce, HBCUs are not only significant, they must thrive.”

Frederick added “It’s not about relevance. It’s about significance,” commenting on the ongoing role of HCBUs in the American higher education landscape.

The institutions, all HBCUs, partnered with Lumina to improve student retention and completion rates. The HBCU Student Success Project, funded by Lumina, provided a four-year grant to each of the universities to support their initiatives.

When discussing the effectiveness of HBCUs in producing Black professionals for generations, Wilson said it is essential to financially support these institutions – it is a proven strategy against America’s racial inequalities.

“I can’t think of another genre of institutions that have led to the kind of intergenerational mobility as have HBCUs. That is a fact,” Wilson said. “So, what we need to be talking about is actually investing trillions of dollars into those institutions that are not experimenting. We know how to do it. We’re not confused.”

“We can have all the analytics. We can lay out a path and tell students to follow the Yellow Brick Road, but some people will still go off in the poppy fields,” Kimbrough said, evoking the image from “The Wiz.”

“That impacts your retention and graduation rates. You can’t just force people to do what you think they should do. That’s part of the process, and we have to be OK with some of that.”

As part of their collaboration, which started in 2016, the HBCU teams developed initiatives to better support students at higher risk for withdrawing from college. Howard University particularly focused on learners eligible for Pell grants, who are more likely to stop out of college due to financial challenges.

Howard University’s board members decided to address the needs of these students with a “GRACE grant,” which pays remaining balances for high-need students who are on track to graduate, Frederick said. Howard University has also implemented a tuition rebate for any student who graduates early or on-time.

“What we immediately saw was a rise in our graduation rate,” Frederick said. “Last year, we were able to close the gap between the Pell Grant and non-Pell grant population to 1 percent in graduation rates. That’s a big testament. If you take away their biggest issue—which is their financial need—they perform extremely well.”

In fact, all three colleges improved retention and completion rates significantly for all students, and for students who need extra support. Dillard University focused particularly on first-generation students and those with unmet financial need of more than $4,000, and closed the completion gap between those students and the overall student body.

HBCUs are open to everyone, the presidents stressed. And besides providing students with more opportunities, they also provide long-term economic benefits to the communities where the schools are located, said Wilson. Morgan State is a public institution, and the MSU president noted that he regularly meets with elected local and state officials. Government officials need to be made aware of the value of the institutions, he said.

“Morgan State’s economic impact on the state, every single year, is $1 billion,” said Wilson, who has shared that statistic with officials in Maryland. “Creating 7,000 jobs and producing ‘X’ amount in taxes, you immediately get their attention.”

Wilson also said there must be an overall commitment among HBCUs to continue to promote higher completion rates among their students. “On an annual basis, we’ll get $15 million to $16 million from the Pell Grant program. We also are bringing to the table about $16.5 million of institutional dollars that we are redirecting to financial aid,” he said.

“The takeaway is that we can’t just rely on the Pell Grant program to lead us to the Promised Land. If this is a top priority of an institution – and it is at Morgan – then we have to come to the table with our own dollars.”

Lumina Foundation is proud to have partnered with Dillard University, Howard University, and Morgan State University to support their ongoing efforts to improve student outcomes. 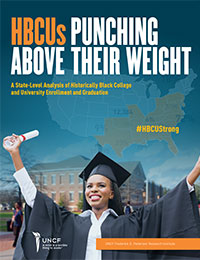 HBCUs Punching Above Their Weight 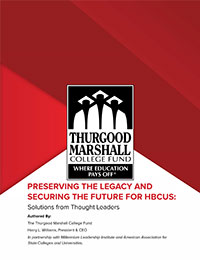 Preserving the Legacy and Securing the Future for HBCUs