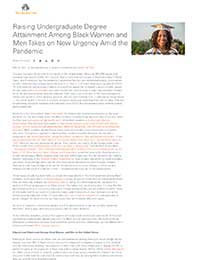 This year has been like no other in the history of the United States. More than 550,000 people (and counting) have died of COVID-19 in the U.S. That is more than the number of Americans killed in World Wars I and II combined. But the pandemic’s devastation has not been distributed equally. Communities of color have disproportionately borne the brunt of it. One in 1,000 Black Americans has died of COVID-19. And while the relative share of deaths among White people has increased in recent months, people of color have died at much higher rates over the last year. Communities of color have also been hardest hit by job and income losses amid the outbreak. That’s due, in no small part, to the historical legacy of slavery and racism on which America was built, and the uncomfortable truth — laid bare by the pandemic — that while slavery in the U.S. is no more, structural racism and racial disparities still run deep: They are longstanding, pervasive, systemic and intentional. And COVID-19 is exacerbating many of these already glaring disparities.

Read the article at The Education Trust.